Having spent years creating the inflation (QE1 to unlimited QE, Repo bailouts, massive money supply expansion, and an historical wealth transfer from an inflated, Fed-driven stock market), the Fed will be cleaning up its own inflation mess on the backs of the U.S. working class while blaming the CPI inflation on Putin, Covid and climate change.

How’s that for rigged to fail?

But that’s just the beginning, and it’s not just about the USA…

Listen to the greatest Egon von Greyerz audio interview ever
by CLICKING HERE OR ON THE IMAGE BELOW.

Engineering a Recession Powell Can’t Control
By raising rates into what we all know is a recession, Powell, who delusionaly pretends to be Volcker re-born, wants to solve the inflation he helped create by engineering a demand-crippling recession he thinks he can control, but can’t and won’t.

And this will be the mother of all recessions, as there is an historical and concomitant debt crisis in every corner of the globe ($300T+) as well as every corner of the nation ($90T+), from the junk-laden corporate bond market and over-strapped households to a grotesquely bloated ($30T+) government debt market.

Keep It (Horribly) Simple
It’s all horribly simple, in fact.

If debt is the everywhere-driver of the economy and markets, then any significant increase in the cost of that debt will destroy every corner of that economy and those markets, from zombie enterprises to negative yielding US Treasuries.

Powell’s hawkish stance will lead to anything but a “contained recession,” which the Fed will be no less effective “containing” as they were in “containing” their so-called “transitory inflation.”

Rising rates will cripple nearly every asset but the artificially inflated USD until all savings are gone, most citizens are hand-out dependent, and most markets are on their knees.

At that point, Uncle Sam will either default on the IOU’s (Treasury bonds) which no one will want, or the Fed will pivot to more mouse-click money to buy/support his debt addiction.

And since the US is too arrogant to fail/default (TAF), the Fed’s only stupid choice left among a long history of stupid, will be a gold-boosting QE pivot.

Yes, An Inevitable Pivot
So, again, when will Powell pivot?

After the pain, politics and panics have reached levels the US and global economy and markets haven’t seen since the FDR era, Powell will through in the towel and pivot.

In the interim, the US, as well as global, middle class can thank Greenspan, Bernanke, Yellen and Powell for all the pain ahead, as it is the direct (and I mean direct) result of years of unprecedented drunken free money and bloated debt, the hangover for which is going to be a record-breaking B!c7%…

A Treasury Market on the Cliff’s Edge
Investors are forgetting that not only is Hawkish Powell raising rates into a debt bubble, he’s slowly tightening the Fed’s balance sheet, which just means dumping more Treasury supply into a demand-less sovereign bond market.

And this supply stream means bonds will fall even further and hence their yields (and interest rates) will keep rising, thereby by adding massive insult to an already fatally injured credit/debt market.

I feel that when UST’s start to tank en mass, Powell’s fantasy of being the next Volcker will end and the pivot toward money printing will be fast and furious—sending precious metals to record highs.

But until then, buckle up.

Powell’s Master Dollar Plan—Foreign Suckers
For now, Powell’s plan is to let rates, yields and hence the dollar rise, in the hopes that the Greenback will be the only place left for global investors (suckers) to hide, which is where they are indeed beginning to hide. 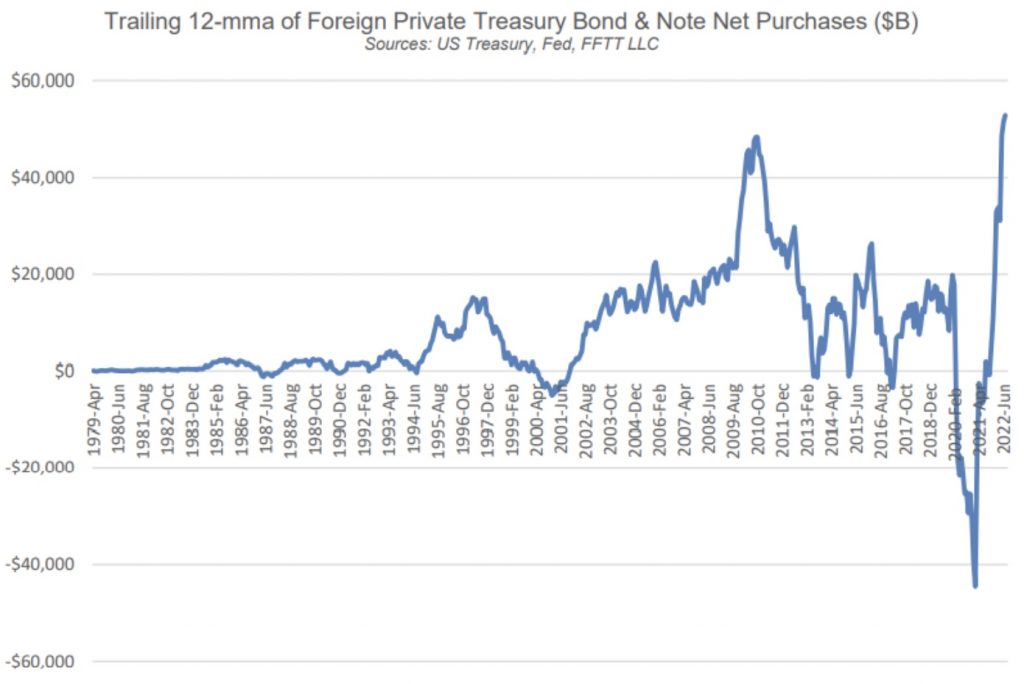 It’s only a matter of time, however, before foreign investors, nostalgic for the days of former US glory, realize that such glory is gone, and that the only way UST’s will ever be “risk-free-return” is if the Fed prints more debased money to buy them, which is not Powell’s current practice.

In essence then, foreigners aren’t hiding in “risk-free-return,” but drowning in “return-free-risk” as even 3-4% yields on the US 10Y Treasury yield a negative -5% return when adjusted for inflation, despite it being under-reported by 50%.

Remember when I said the Fed has no good options left? I meant it. It’s either tighten and risk systemic collapse, or ease and destroy the currency.

Losing Faith in Uncle Sam’s IOU’s
At some point, Americans, as well as the rest of the world, will realize that the US is not what she used to be, and neither are her IOU’s.

For the first time in almost a century, faith in Uncle Sam will reach a nadir and precious metals their apex.

This is not “gold-bug” posturing but hard math and political reality colliding with the lessons of current and past history.

Take the Pathetic Example of Japan
The Fed’s rate hikes have pushed Tokyo and its Yen to its knees.

The Bank of Japan, unlike the controllers of the world reserve currency (i.e., the Fed), flatly cannot afford to raise rates and pay its JGB’s (i.e., IOU’s) at the same time.

The Bank of Japan is printing Yen like gangbusters and keeping inflation deliberately above interest rates.

Yet even in this openly negative-real-yield nightmare, the Japanese 10Y didn’t trade for 2 days.

Meanwhile, as the Yen dropped to 50-year lows, Japan was forced for the first time in nearly three decades to prop its currency by making a direct intervention in the FOREX, which entails selling a batch of the UST’s it had on reserve.

This explains why the TLT (US Treasury ETF) lost 3% on the same day. Meanwhile, US junk bonds (as measured by the LQD ETF), fell to lows not seen since the COVID lows. 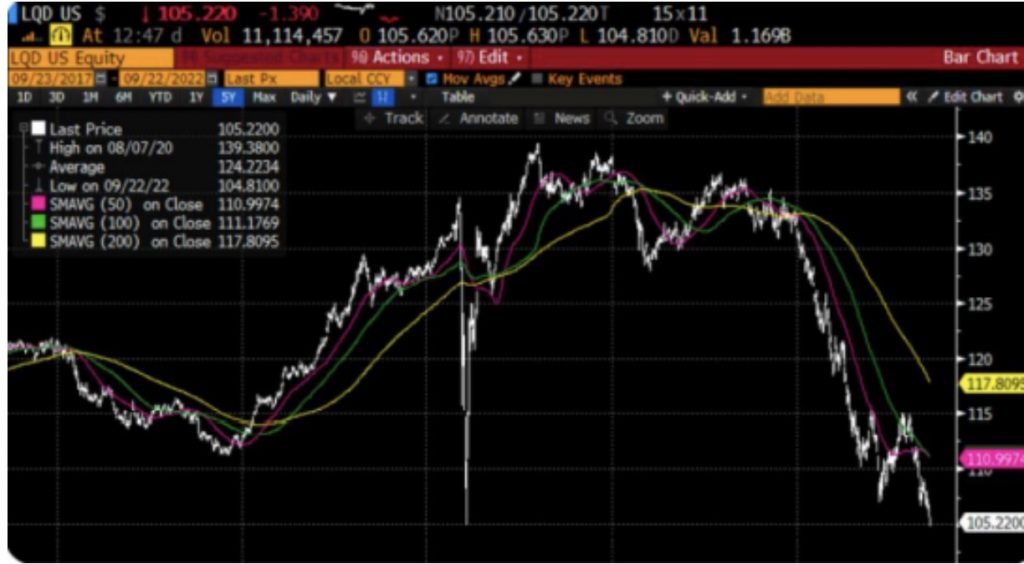 And Then There’s the EU…
Japan, of course, won’t be the last nation to reach such desperate levels, and as more UST’s are dumped/sold, debt costs in the US will only get more, not less painful, regardless of what the Wizard of Powell does from DC/Oz.

Foreigners own over $18T is USD assets, including bonds, real estate and dollars. Once the distressed selling starts, it goes from slow to rapid very quickly, which means pain levels for Main Street American debtors will rise equally fast.

Other nations “friendly” to the US are feeling equal pain from Powell’s hawkish Fed and strong USD.

Germany, for example, is seeing yields on its two-year bonds above 2% for the first time since 2008, an otherwise once anemic rate which it literally can’t afford.

As yields in the EU rise as a result of its US “ally’s” policies, the EU starts to quiver and shake, as this means the EU’s interest rates rise too.

But with debt-soaked countries like Italy teetering towards Frankenstein levels, Powell is pushing the EU into a national security (currency and debt) trap as well as political crack-up.

Again, what will EU nations do?

They’ll likely turn Japanese and start dumping US Treasuries and dollars to keep the lights on from Paris to Portugal.

Even in China, big firms are already selling USD assets and commercial real estate (over $20B since 2019) at an increasingly alarming rate.

Powell’s Strong Dollar Policy is Backfiring
In short, Powell’s strong USD policy, like the West’s sanctions against Putin, are openly backfiring as America’s “allies” bend under the oppressive ripple effects and weight of an artificially strong USD—and all of this as the EU heads into a winter with less energy from the East.

These converging currency, debt and energy patterns look like the weather map of a perfect storm.

In short, foreign currencies, suffocating under the weight of Powell’s strong USD, will continue to tank as global bond markets continue to dry up and hence implode.

Unless the Fed reverses course on its strong USD policy (and pivots to more QE/Mouse-click magic), global markets face a legitimate risk of systemic collapse.

For all of these reasons, I remain steadfast that global currency and sovereign debt markets cannot and will not last long under Powell’s current strong USD policy.

Unless the Fed pivots to more pathetic QE (and hence a weaker, debased USD), the systemic risk discussed above will become systemic implosion.

For now, the ball (or dollar) is in Powell’s court, and he’s got a terrible serve…This will link you directly to more fantastic articles from Egon von Greyerz and Matthew Piepenburg CLICK HERE.