Gold Futures Surge $35, Silver Up 5% But Look At All Of Today’s Surprises

Gold futures surged $35 and silver was 5% higher as the US dollar tumbled, but look at all of today’s surprises.

Silver
November 30 (King World News) – Graddhy out of Sweden:  This ratio chart shows how extremely undervalued silver is. And on lower time frame, it is close to a big break out. This chart visualizes the HUGE potential in the commodities bull market, which I have been pounding the table for since called the bear market low in April 2020.

SILVER IS INSANELY UNDERVALUED:
Parabolic Chart Envisions Up To An 80X Surge In The Price Of Silver 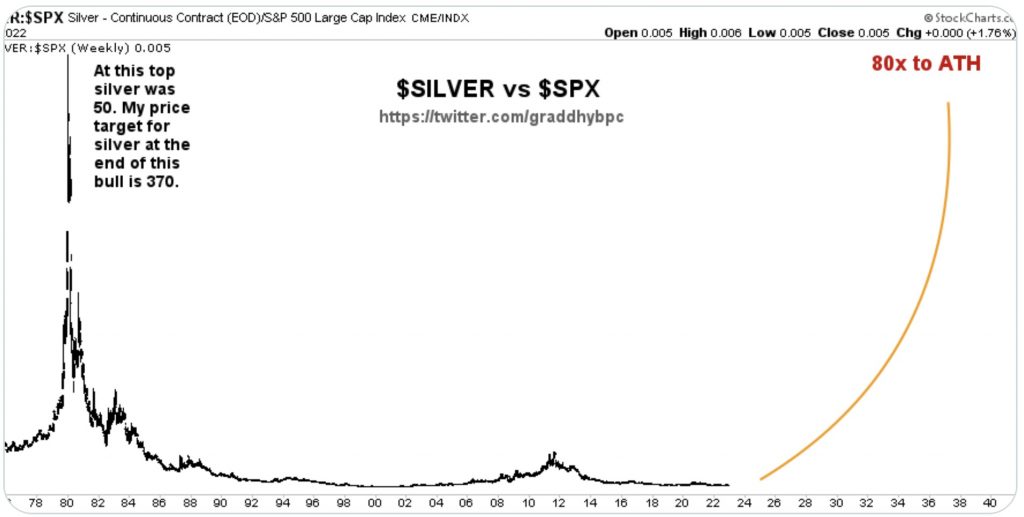 Silver
Graddhy out of Sweden:  Silver’s all-time high is not $50, it is $806. In 1998 USD value… Silver had been in decline for 500+ years when it bottomed out around the millennium. Could $800 happen briefly again when silver goes ballistic towards the end of the commodities bull market? Absolutely.

$800+ Silver During This Bull Market? 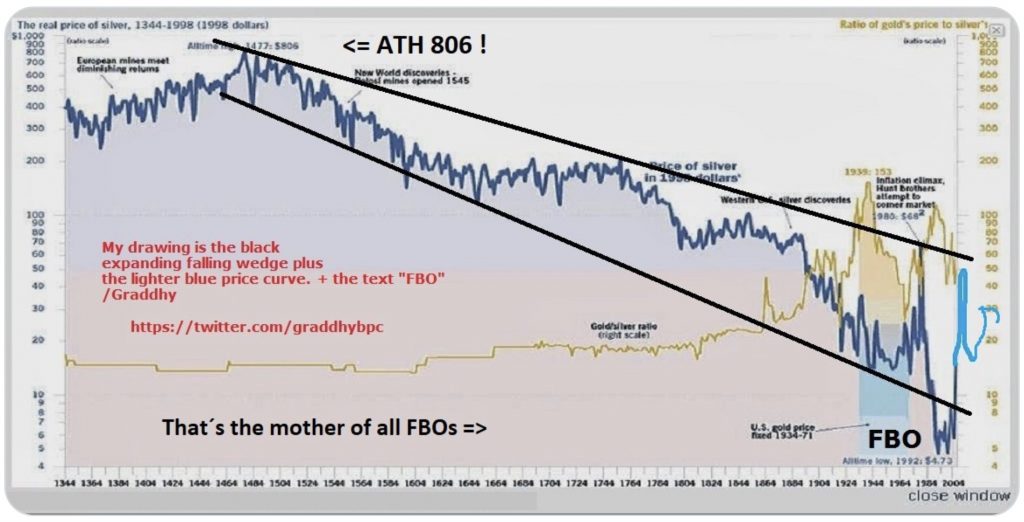 Gold vs S&P
Graddhy out of Sweden:  The ratio GOLD vs SPX is very close to a historical break out. This coming break out will mark the global shift in capital flows towards precious metals. And this break out coincides with USD topping. A new paradigm shift is in the making. So it begins.

Gold vs S&P 500:
Gold Will Radically Outperform S&P 500 In The Coming Years 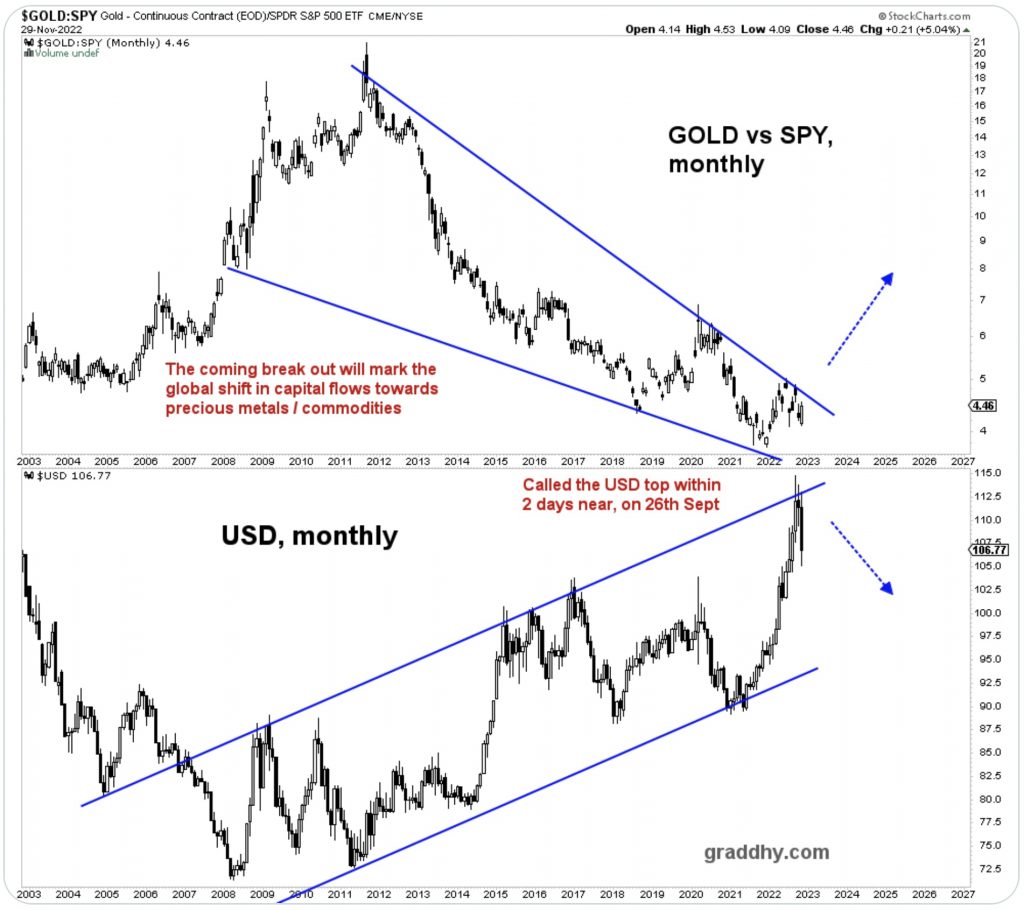 US Dollar
Peter Brandt:  Will U.S. Dollar bears finally be proven right? Or is the Nov decline simply a retest of an underlying 5+ year base. 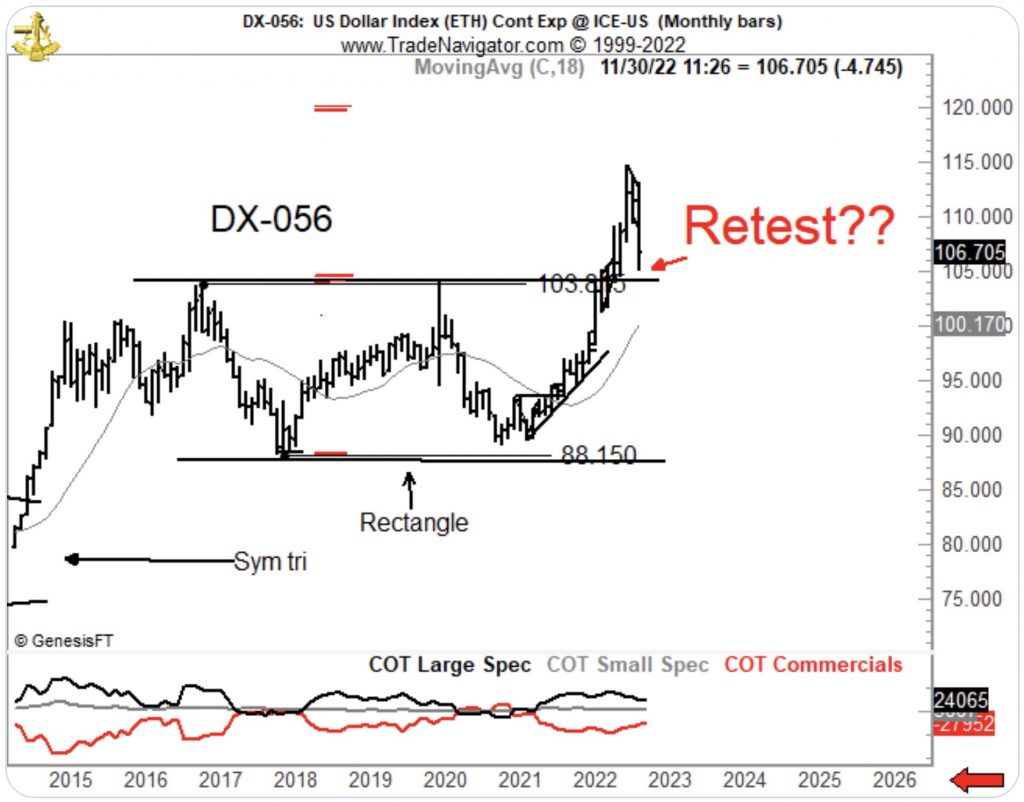 Economy
Art Cashin, Head of Floor Operations at UBS:  The various bits of economic data this morning seem to suggest the economy is a touch stronger than the many economists thought.  That seems to tell traders that Powell may move to the more hawkish side and that is adding some to the puzzlement.  The S&P, interestingly, seems to be trafficking between the 100 day and the 200 day moving average.  The 100-day represents support at 3919 and, of course, the 200-day has been very effective as resistance is up about 4050.  So, we will see where they will go.

The yield on the ten-year remains center stage.  The same economic data inched the yield up higher – it went above 3.75%.  The pressure on equities increased a bit.  If it goes through 3.80%, pressure will probably intensify.  So, we will continue to watch some of the data coming out, but everyone is probably about to focus on the presentation by Powell at 1:30, followed by the Q&A and the Tan Book at 2:00 p.m.

Remember the Asian challenge – – May you live in interesting times.

Crowdstrike
Peter Boockvar:  I’m going to start today with a quote from Crowdstrike in their earnings press release last night to highlight how circumspect businesses, especially small ones, are becoming in this slowing economic environment. After talking about still “robust growth”, “total net new ARR (annual recurring revenue) was below our expectations as increased macroeconomic headwinds elongated sales cycles with smaller customers and caused some larger customers to pursue multi-phase subscription start dates, which delays ARR recognition until future quarters.”…

China Reacting To Protests
To add to more signs that China is responding to the protests, I saw Reuters reporting today that “China’s Guangzhou city relaxes Covid rules in several districts.” In the article it said, “One district, Conghua, said it would allow in-person classes in schools to resume and would reopen restaurants and other businesses including cinemas.”

I saw a story on China’s Global Times that said “Beijing to reduce hospital service interruptions amid Covid-19 control.” The piece stated “Beijing authorities on Tuesday told hospitals to avoid closing important departments, such as emergency and maternity departments, even if they have been hit by Covid-19 cases.”

Lastly on this, in yesterday’s South China Morning Post (owned by Alibaba), a story headlined “China’s policymakers urged to clarify how economic growth, zero-Covid can go hand in hand.” The bullet points were: “Academics and government advisors say trillions of yuan’s worth of China’s GDP appears to have been lost this year due to Beijing’s disruptive coronavirus-control policy. Impact on people’s lives and on China’s economy at large necessitate a more clearly conveyed strategy, experts say amid recent protests.”

The rally in Chinese stocks continued in Hong Kong as the Shanghai comp was little changed. The H share index was up by 2.2% and is up by 8.5% over the past two trading days. The yuan is up sharply too, with the offshore FX rate higher by .9% after yesterday’s 1.5% jump. Copper is up by 2.9% and brent crude by 2.5%.

The reopening hopes, whatever pace it takes from here and however bumpy, offset the current tough economic situation there as seen with the state sector weighted manufacturing and non-manufacturing PMI for November which fell to 47.1 from 49 with both below 50.

Europe
In Europe, the November Eurozone CPI figure was up 10% y/o/y vs 10.6% in October and 4 tenths less than expected. The slower increase in the rate of energy price increases was the reason for the moderation. Taking out food and energy though and it was up 5% as forecasted and at the same pace seen last month. The CPI number didn’t ease inflation worries much as the 5 yr 5 yr euro inflation swap is up for a 3rd day and by 1.5 bps today to 2.35%. After falling yesterday, sovereign bond yields are up slightly today. With regards to the next ECB meeting on December 15th, the hawks sound like they want another 75 bps rate hike and the doves want 50 bps. Either way, the deposit rate will remain WELL BELOW the rate of inflation.

US Mortgage Rates
Shifting to the US, the average 30 yr mortgage rate fell for a 3rd straight week to 6.49% according to the MBA. As this data is for the week ended November 25th, the Thanksgiving holiday likely distorted the numbers as refi’s fell 13% w/o/w while purchases were up 3.8%. Versus last year, refi’s are down by 86% and by 41% for purchases.

With respect to Jay Powell today and his speech, my chips are on his expressed desire on one hand to slow the pace of rate hikes but reinforce that rates will stay higher for longer when they are done.

***To listen to Nomi Prins discuss her surprising predictions for 2023 as well as why 2023 will be a huge year for the gold, silver and mining share markets CLICK HERE OR ON THE IMAGE BELOW.

To listen to Alasdair Macleod discuss the collapse in open interest and what this means for gold and silver CLICK HERE OR ON THE IMAGE BELOW.