Here Is Where Things Stand In The Gold, Silver And Currency Markets

Here is where things stand in the gold, silver and currency markets.

September 9 (King World News) – Alasdair Macleod:  After a weak start, gold and silver are ending this week on a firmer note. This is particularly noticeable in silver, which rose 70 cents from last Friday’s close to trade at $18.81 in early morning European trade today. Gold’s rise was more subdued, rising $13 over the same timescale to $1722. 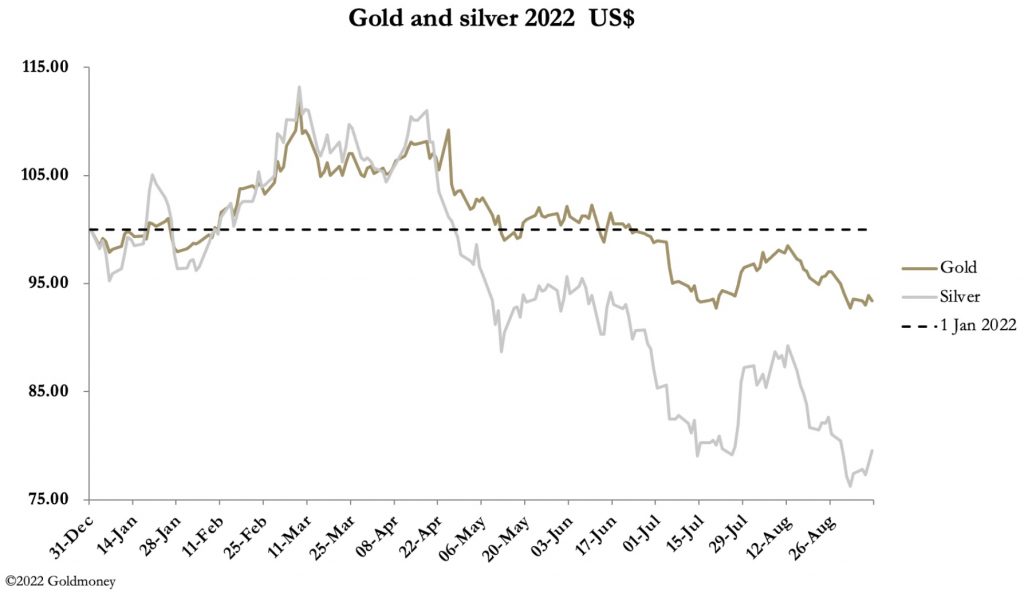 The most significant event was the ECB finally raising it deposit rate by 0.75%, promising more increases to come. Finally, we have a recognition that inflation is the greatest threat to the Eurozone. Consequently, the euro has rallied from 0.9900 to 1.0070 to the dollar. The effect on the dollar’s trade weighted index has been to undermine it in the last two days. This is our next chart. 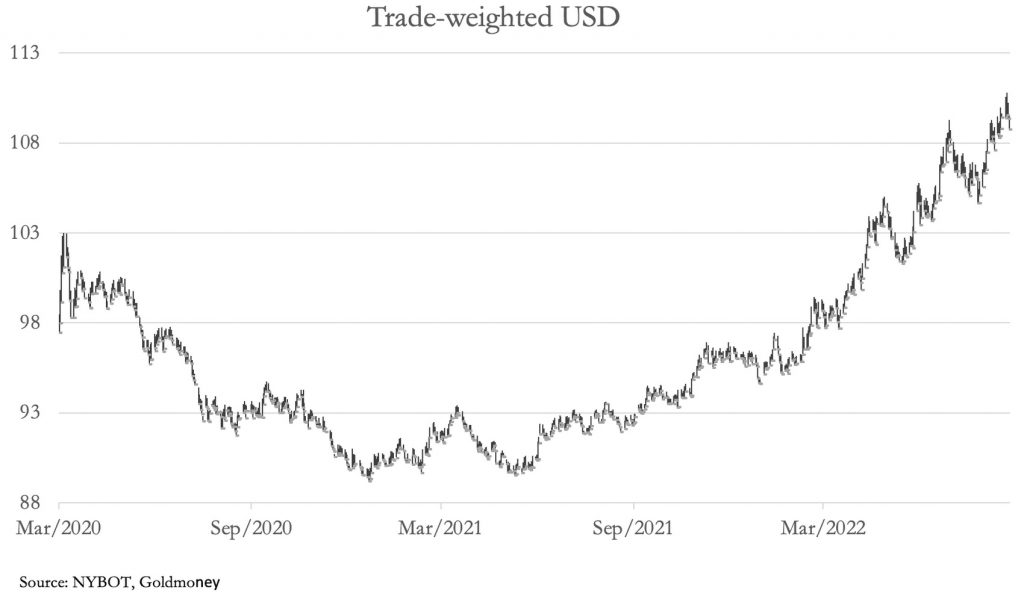 It is too early to say that the uptrend has been broken, but we can say that the chart shows the hedge fund world is as long of the dollar against the euro as it gets, and it is vulnerable to a significant reversal. That being the case, we must see what could turn it.

Most traders have sold the euro short because of the interest rate differential against the dollar. While the Fed has raised its funds rate to over 2.25% in a number of steps since last February promising more to come, the ECB has been silent, other than normalising its negative deposit rate to zero. Consequently, the euro was in a significant downtrend against the dollar for more than a year. This is next. 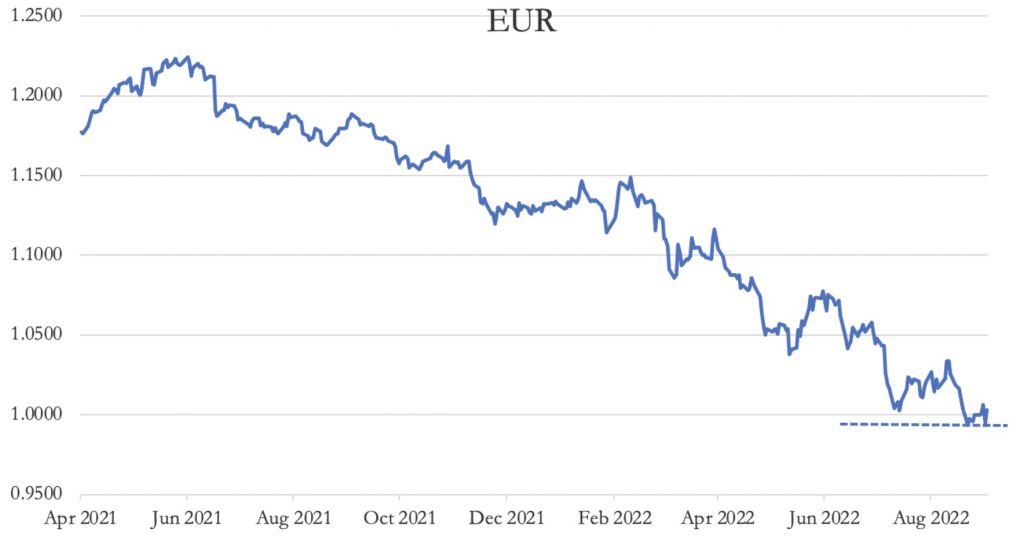 Whether or not breaking the EUR 1.0000 level has prompted the ECB’s change of heart, traders short of the euro are now vulnerable to a significant bear squeeze, which could easily propel it to 1.0500—1.1000 fairly rapidly.

This matters for the dollar’s trade weighted index, which is more than 50% comprised of the euro. Therefore, we can expect the dollar’s TWI to decline, unwinding the bull positions in the dollar not just against the euro but also against other currencies, particularly the yen and sterling.

There is no doubt that the central banks would welcome this development because the situation was becoming destabilising. But the good news for precious metals and perhaps commodities generally, is that with the dollar weakening, the shorts against commodities will be squeezed as well.

The technical position for gold is our last chart. 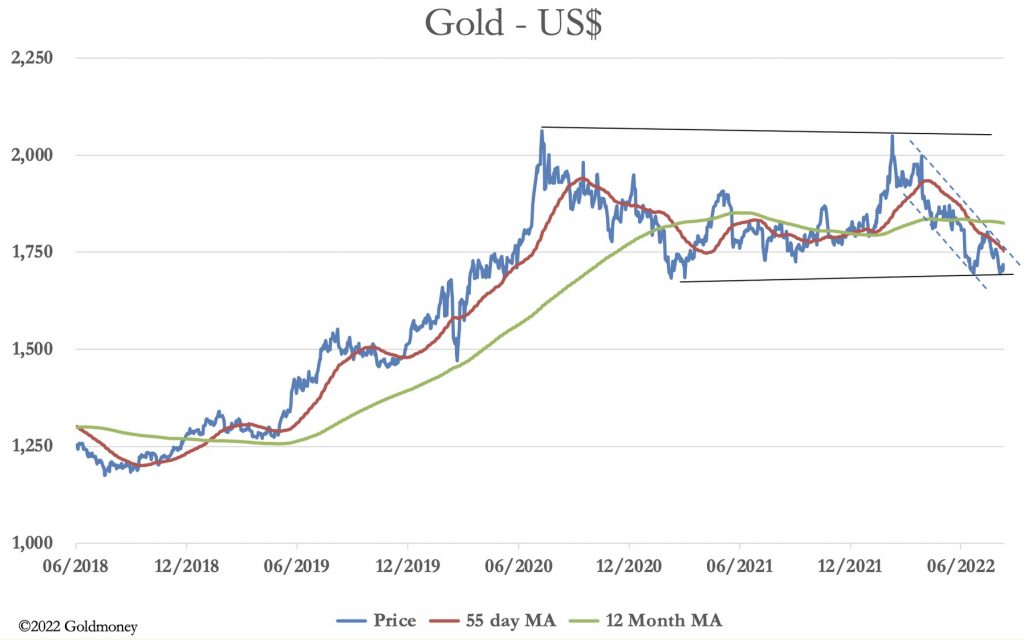 While the downtrend since March is still intact, and the moving averages are still bearish, the evidence is that the $1680 level is solid, and that even if gold is driven below it, it would be a temporary sell off because all other indicators are very oversold. Now that we can discern a potential bear squeeze developing in the euro, we can be reasonably certain that the weaker dollar would force Comex gold bears to close positions, which between managed money, other reported and non-reportables totalled 144,553 contracts at the 30 August, the last available commitment of traders’ report.

These are bear squeeze conditions which favour silver particularly, which is why its rise this week has outpaced that of gold.

Original link
Tweet
With the death of Queen Elizabeth II, what happens...
With ascension of King Charles III, the look of Br...