September 27 (King World News) – James Turk:  The Federal Reserve just released its August calculation of M2, which measures the quantity of dollars. There was little change from the previous month and that is the key point.

It is becoming clear, Eric, that the Federal Reserve is taking an untested approach in its attempt to try controlling inflation. And it comes with risks that could collapse this house of cards built up with decades of debt.

Before Paul Volcker was appointed chairman of the Federal Reserve in 1979, M2 was growing at double-digit rates as high as 12.5% per annum. So he set out to reduce this rate of growth by embarking on a policy that raised US dollar interest rates…

His goal was positive interest rates to fight inflation, and he succeeded. In other words, you could earn interest income above the inflation rate, which at one point was more than a phenomenally high 6%.

That’s how capitalism is supposed to work. Savers defer today the purchase of goods and services to some future date, and the enticement to forgo consumption now is the greater purchasing power you have in the future from the interest you earned.

This approach enabled Volcker to reduce the M2 rate of growth to 4.5% by the time he retired in August 1987. But even though M2’s growth rate was falling, the amount of M2 kept growing. In other words, the quantity of dollars rose each month during Volcker’s 8-year tenure, but just grew at a slower rate. The current Fed is taking a different approach.

Instead of raising interest rates high enough to attain positive rates adjusting for inflation, the Fed is has put a lid on the quantity of dollars, as we can see on the following chart of M2. 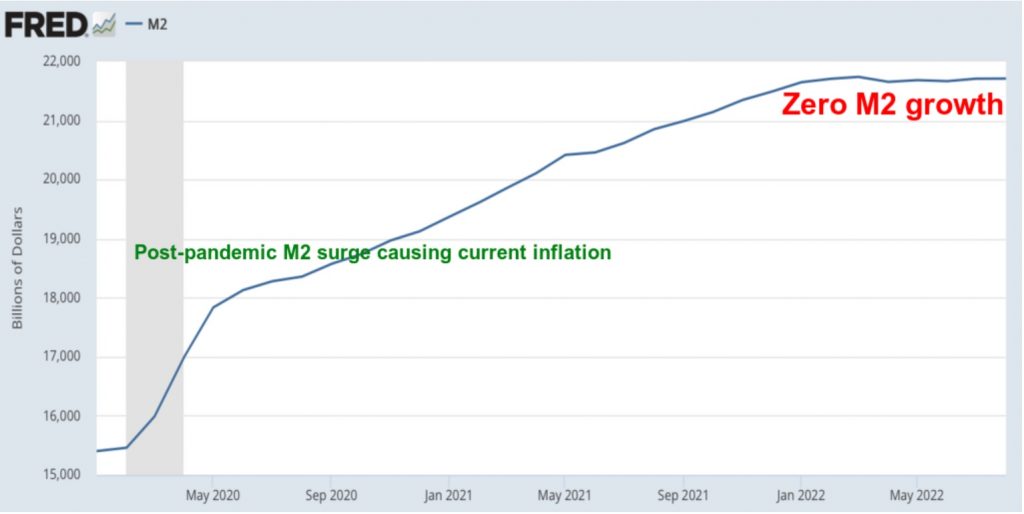 The monetary system the Fed runs today is based on one key principle – inflate or die. If M2 does not grow, the house of cards collapses because the debt load becomes unsustainable. The evidence is the collapse in bonds and stocks, and the liquidity squeeze is likely to get worse if the Fed keeps its foot on the M2 brake.

Original link
Tweet
Junk Bonds: The Canary in the Coal Mine
Rise In US Dollar Main Reason For Gold & Silver Fa...