Record Amount Of Money Betting On A Stock Market Crash

An all-time record amount of money is betting on a stock market crash.

Last week, the smallest options traders continued to hedge against a market decline Large traders spent record amounts on bets against equities and ETFs Historically, extremes in these traders’ positions have been consistent long-term contrary indicators

Options traders of all sizes press record bets against stocks and ETFs
After the options trading frenzy among small traders in February 2021, they settled back later in the year. This year, their activity showed a steadily decreasing appetite for risk – which makes sense because anything risky kept declining…

Earlier this summer, the smallest options traders, transacting in 10-lots or fewer, were spending more on buying put options to open than call options. It’s extremely rare for them to be net bearish, and while they reduced their put buying a bit during the July rally, they’re back at it. 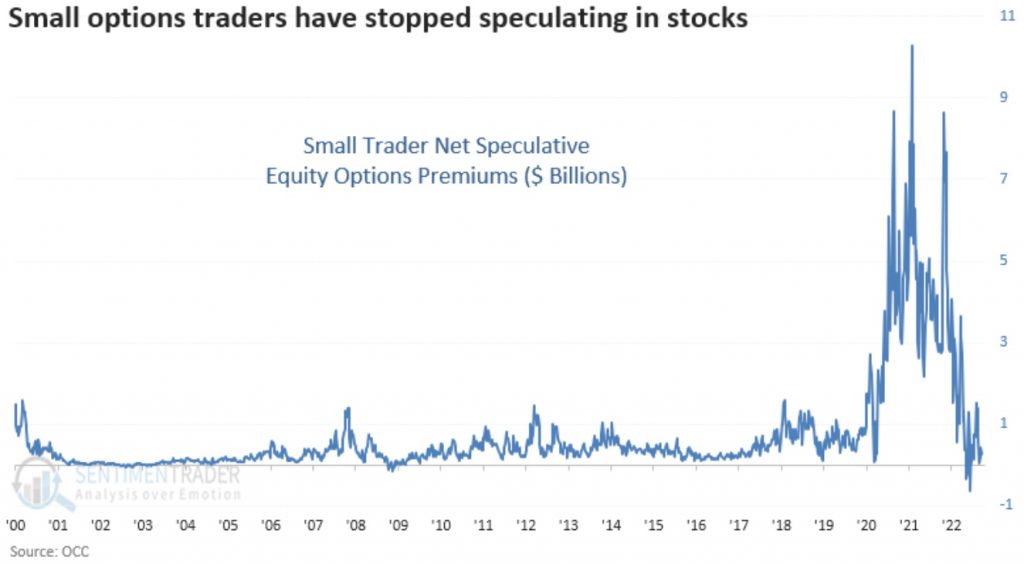 It’s even more egregious in ETFs. Small traders’ activity in ETF options has been skewed heavily to the put side. They spent $377 million more on put options last week than call options. Over the past four weeks, they’ve been $1.6 million more on puts. The only time they approached this extreme was mid-March through mid-April 2020. 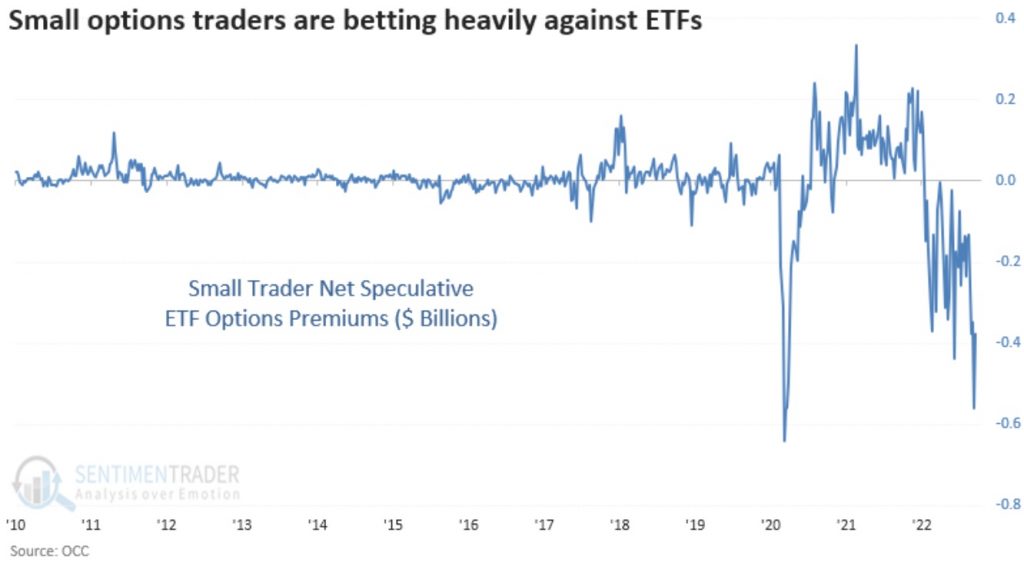 Among large traders, activity is even more notable. Once again last week, they spent a record amount on hedges relative to speculative contracts. Their net premiums approached $8 billion, meaning they spent nearly $8 billion more on equity put options to open than call options to open. 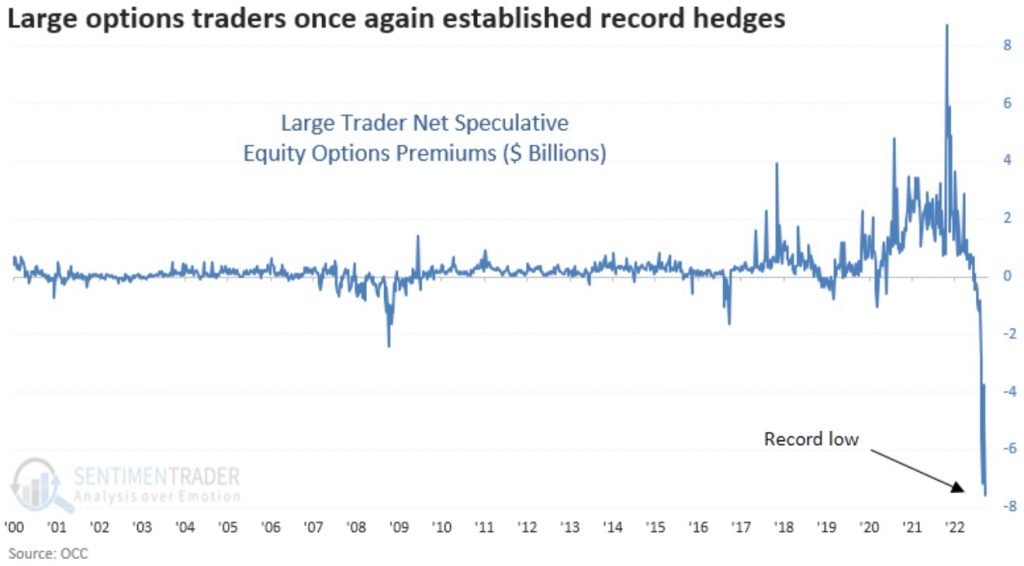 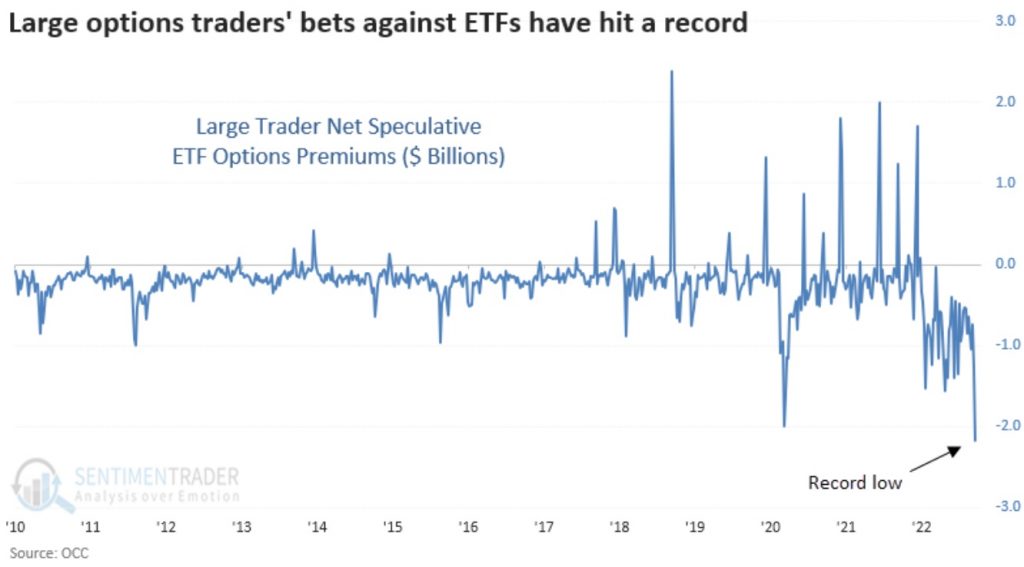 When we look at the amount of money spent on opening put buying among all retail traders, regardless of size, it’s stunning. Last week totaled nearly $18 billion, by far a record high. 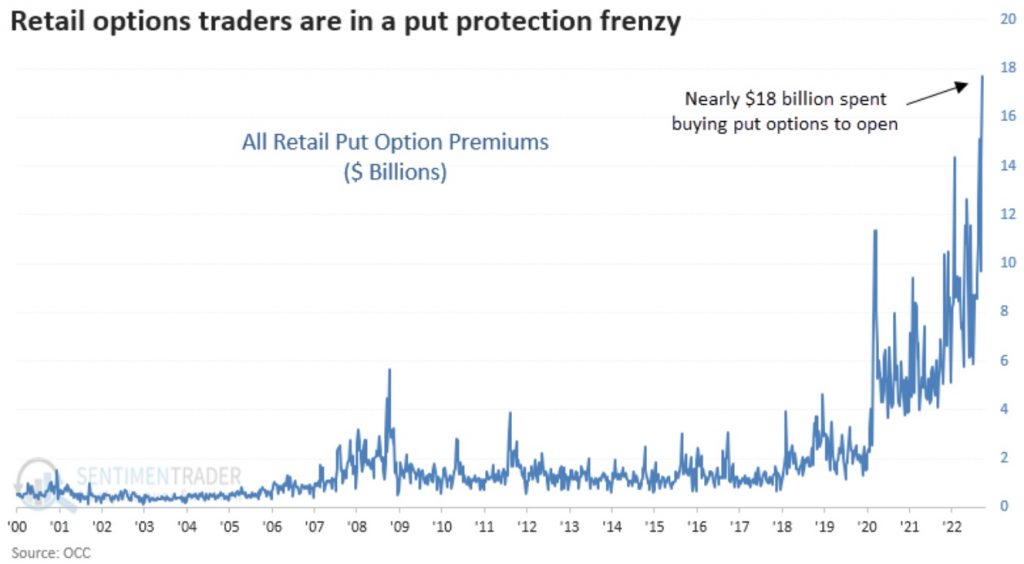 Of course, markets have grown over time. The chart below puts this into the context of the total market capitalization of all U.S. stocks. After that normalization, last week’s activity matched the week ending March 20, 2020. It wasn’t quite to the level of October 10, 2008, the only other week with this much put buying. 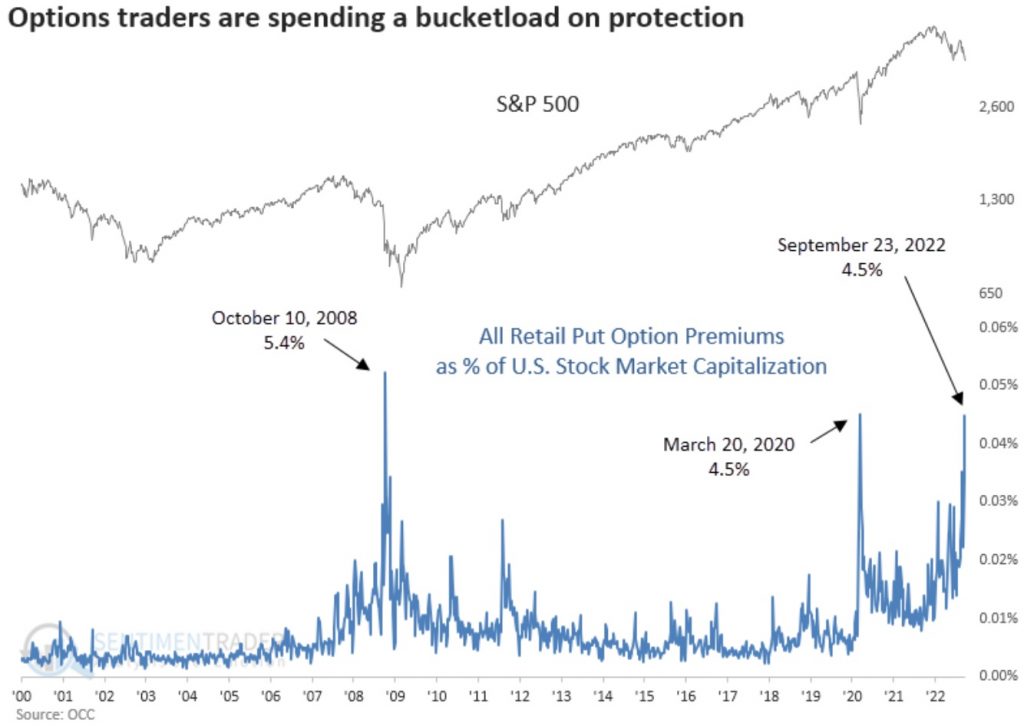 What the research tells us…
For the past few weeks, we’ve seen traders favoring hedging activity, particularly buying puts to open. And among all traders, the largest were showing the most interest. Historically, that has not been a good reason to buy stocks blindly, assuming it will result in an immediate counter-trend rally. But options activity among retail traders has been a consistent medium- to long-term contrary indicator. It strongly suggests that whatever selling pressure is hitting stocks now and maybe in the weeks ahead should be reversed long-term. This is another example of why Jason Goepfert is the best in the world at what he does – providing actionable market data. To subscribe to the internationally acclaimed work Goepfert produces at SentimenTrader CLICK HERE.