This Is Why Gold & Silver Just Reversed Higher

This is why gold and silver just reversed higher along with the mining stocks.

September 16 (King World News) – Alasdair Macleod:  It was a mixed week for precious metals, starting with a promising rally and a bear squeeze particularly noticeable in silver, before the dollar benefited from a renewed flight out of euros, yen and pounds. Additionally, the Chinese yuan had a torrid week. In this currency turmoil, gold lost $46 from last Friday’s close to trade at $1660 in European trade this morning. Silver was almost unchanged at $18.89. 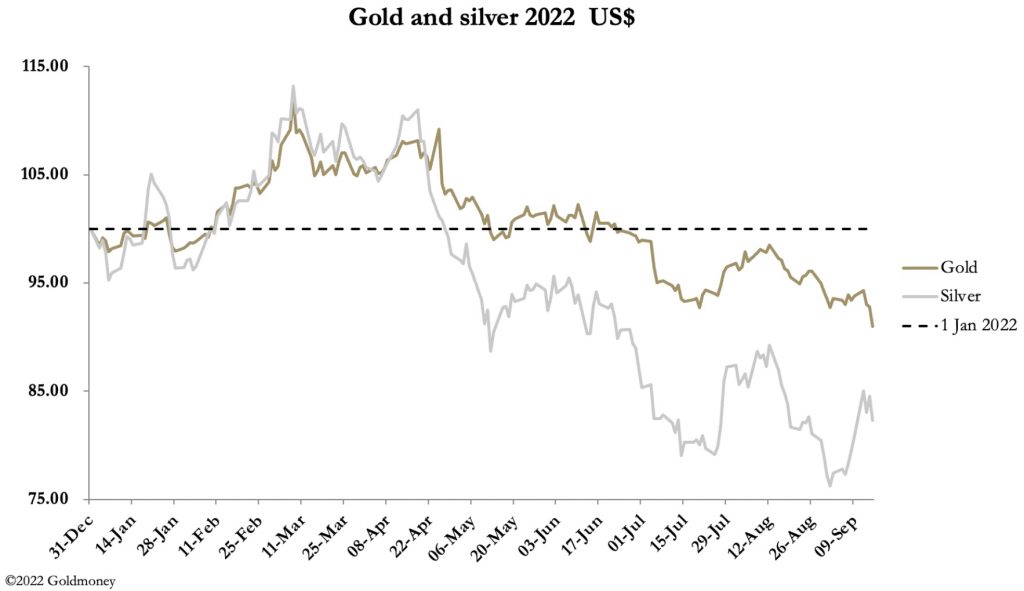 As can be seen in our headline chart, silver traded as high as $20 on Monday. While traders are shorting paper derivatives, reports from everywhere are of demand for physical, which is in short supply. Indian silver imports soared to 5,100 tonnes in the first seven months of 2022.

It is hardly surprising that bear squeeze conditions exist in silver. Our next chart shows that hedge funds on Comex are dangerously net short. 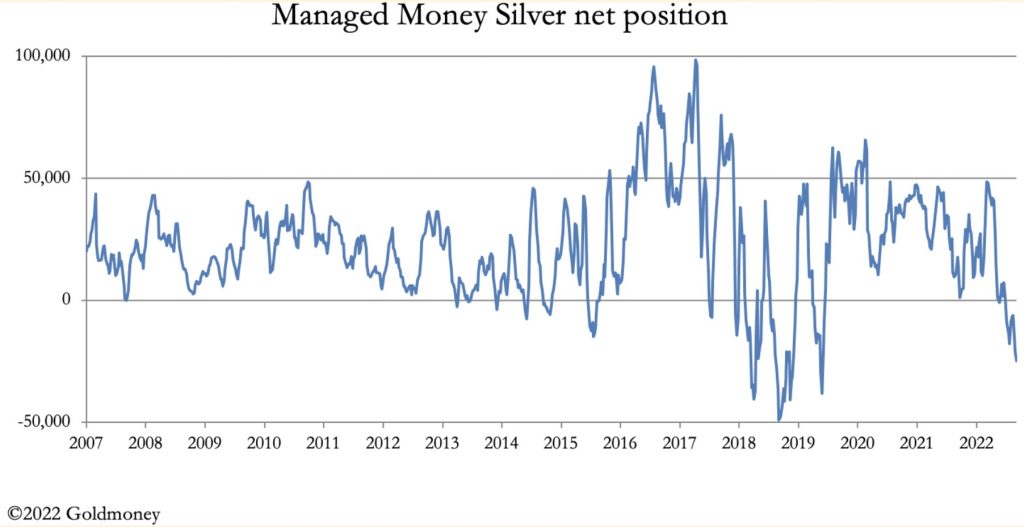 The slightest let up in the dollar’s trade weighted index is bound to trigger a buying panic in a market seriously depleted of physical bullion. The dollar’s TWI is up next. 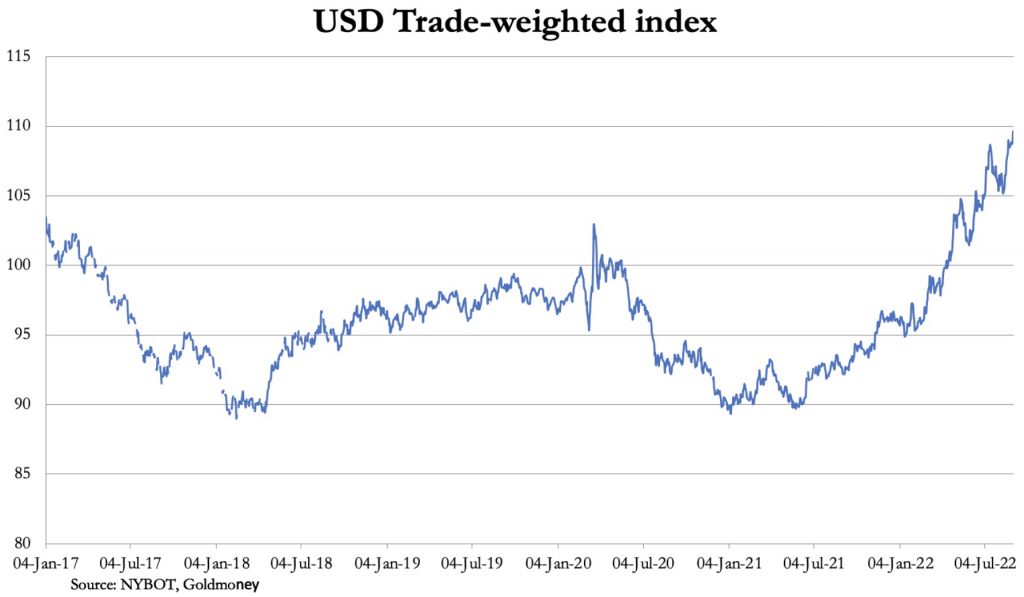 What’s driving it all? The first point to note is that US bond yields are rising and look like breaking higher, leaving interest rates in other currencies behind. 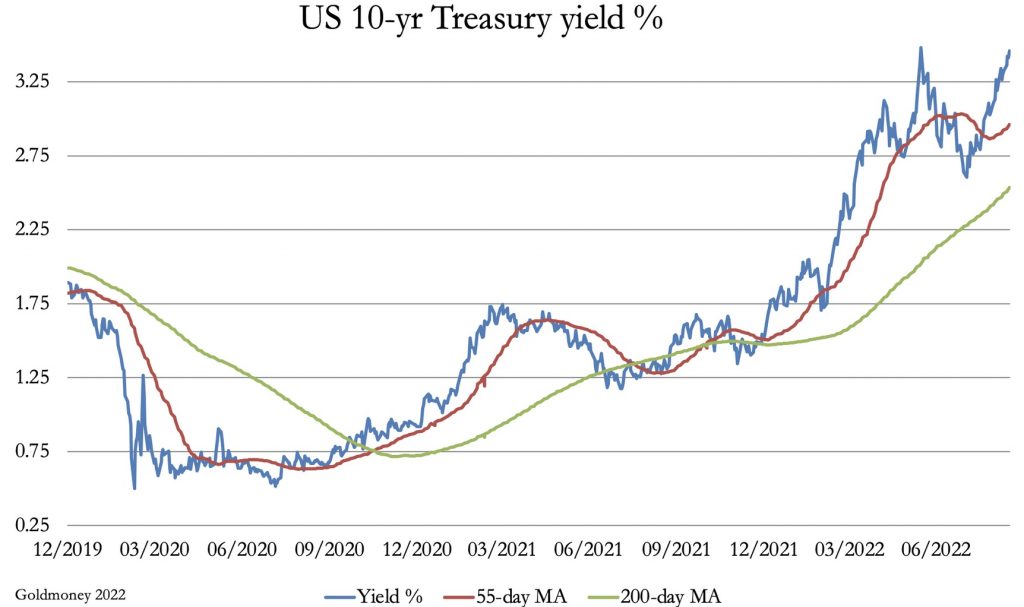 This is probably the chart which is making paper markets run for cover. The effect on other major currencies is next. 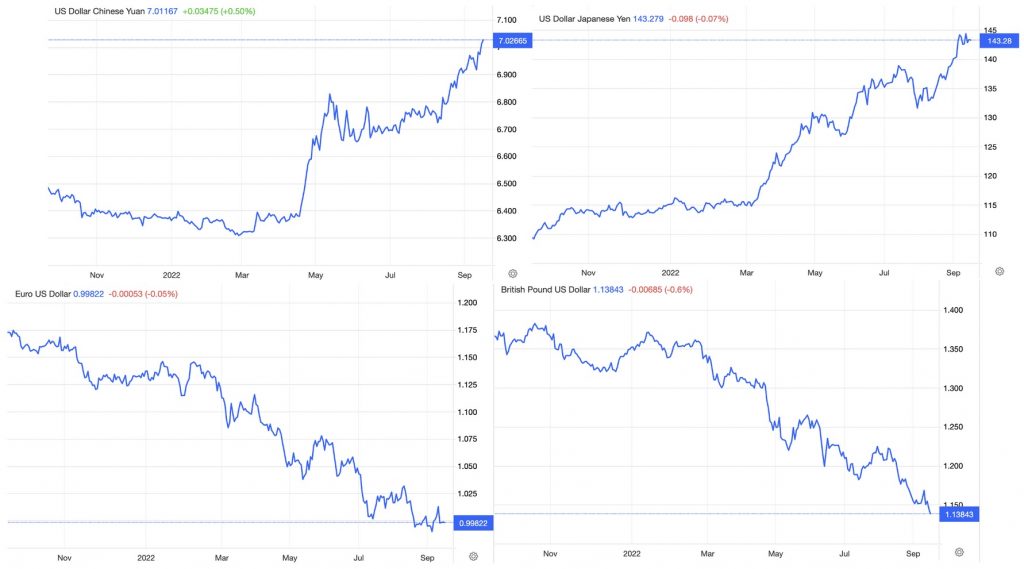 The currency collapse against the dollar continues, with no let-up in sight for the yuan, yen, euro, and pound. It is hardly surprising that international speculators see these currencies as shorting opportunities.

That being the case, despite the lack of physical and Comex vaults being drained of gold and silver registered for delivery, one can see why the hedge funds (who very rarely take delivery) persist in shorting paper gold and silver. On 6 September (the last Commitment of Traders Report — due to be updated later today) the Managed Money category was net short gold 6,972 contracts, but there is little doubt that the position today is even more extreme. For reference, the long-term average position for this category is net long 110,000 contracts…

With US Treasury yields rising, equity markets have been hammered as well. From Monday’s opening, the S&P500 index has fallen 5.5%. Markets had been lulled into thinking that evidence of increasing economic weakness would put a cap on interest rates. Now they awakening to the prospect of yet more rising interest rates, bond yields and a deepening recession.

In Keynesian theory, inflation and recession together cannot be explained. Therefore, it is no wonder that the investment management establishment is confused. And it is no wonder that the gut reaction is to sell everything for liquid dollars. But that is usually the reaction to these circumstances, to be followed by a realisation that jumping out of the pan into the fire is not sensible.

While frightened traders are running in the wrong direction, stackers will be unfazed and rejoicing at the opportunity to pick up more wrongly priced gold and silver.