Many are expecting deflation but here is why inflation hell may still be in front of us.

January 25 (King World News) – Kevin C Smith:  An economic downturn is indeed likely and could be severe in terms of market impact due to the re-acceleration of inflationary pressures. If we are right, general investor positioning is off.

All five major structural drivers of inflation should play out over the next decade to keep CPI growth high and drive currently low expectations higher: 1. Demand-pull, 2. Cost-push, 3. Built-in, 4. Monetary, and 5. Import-led.

1. Manufacturing Revitalization: The Inflation Reduction Act of 2022 (IRA) is a misnomer. As noted by McKinsey study, this was the third piece of legislation passed since 2021 unleashing at least $2 trillion in government spending over the next ten years to boost the US economy.

These are all “demand-pull” drivers of rising prices, aka policy-led Keynesian stimuli like the New Deal and Great Society programs of the 1930s and 1960s each subsequently contributing to the biggest inflationary decades of modern US history in the 1940s and 1970s…

2. Resource Underinvestment: This supply constraint is a “cost-push” inflationary factor, the clearest one that is destined to substantially raise prices throughout the economy due to the lag-effects of the historic 8-to-12-year decline in capital spending.

3. Resurgence of Labor’s Pricing Power: Workers’ share of economic activity through wages and salaries is coming off historic lows as the workforce population growth is likely to remain constrained. 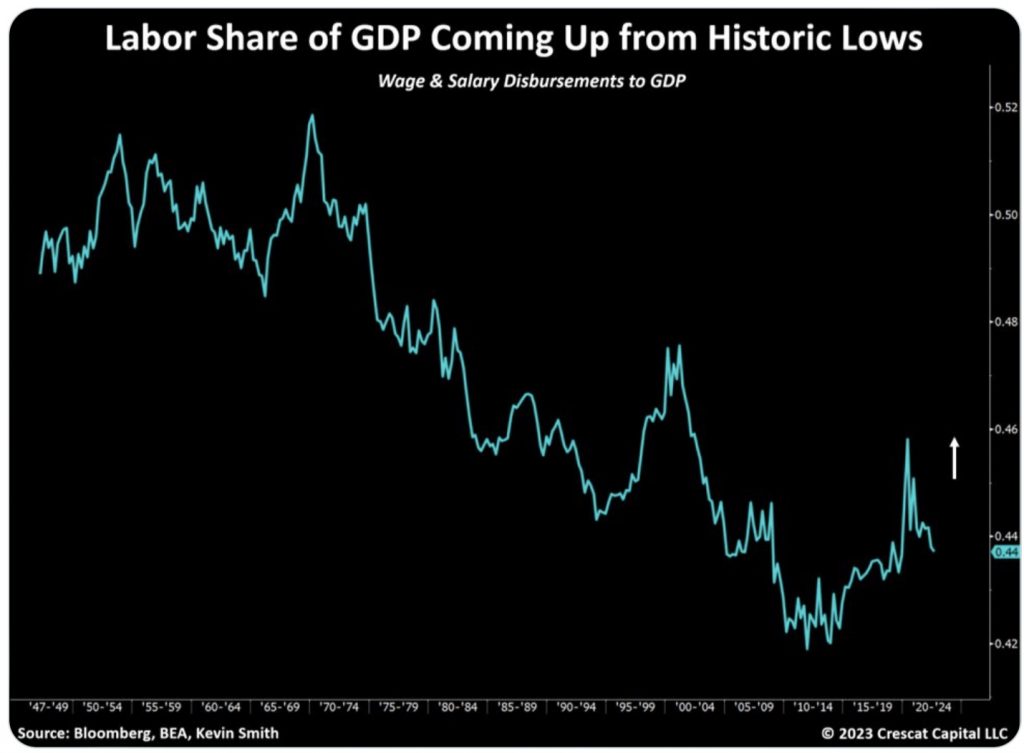 If workers have the power to demand higher wages, it can lead to a “wage-price spiral”. The concern here is the potential “building-up” of what economists call “built-in” inflation.

However, if consumer prices continue to exceed market projections, as they have for the last two years already, people and businesses will sooner or later lose confidence in fiscal and monetary authorities…

The “wage-price spiral” is the interplay of labor and businesses ratcheting up their inflation expectations, a structural juggernaut.

We see this phenomenon as highly likely over the next decade. Workers should have increased leverage in this game over corporations due to the demographics of an aging population including the retirement of the baby boomers.

The share of GDP going to corporate profits is also coming off historic highs. This is the mirror image of labor’s increasing pricing power but also highlights the risk to corporate profits which can get squeezed in an impending inflationary recession like those of the 1970s. 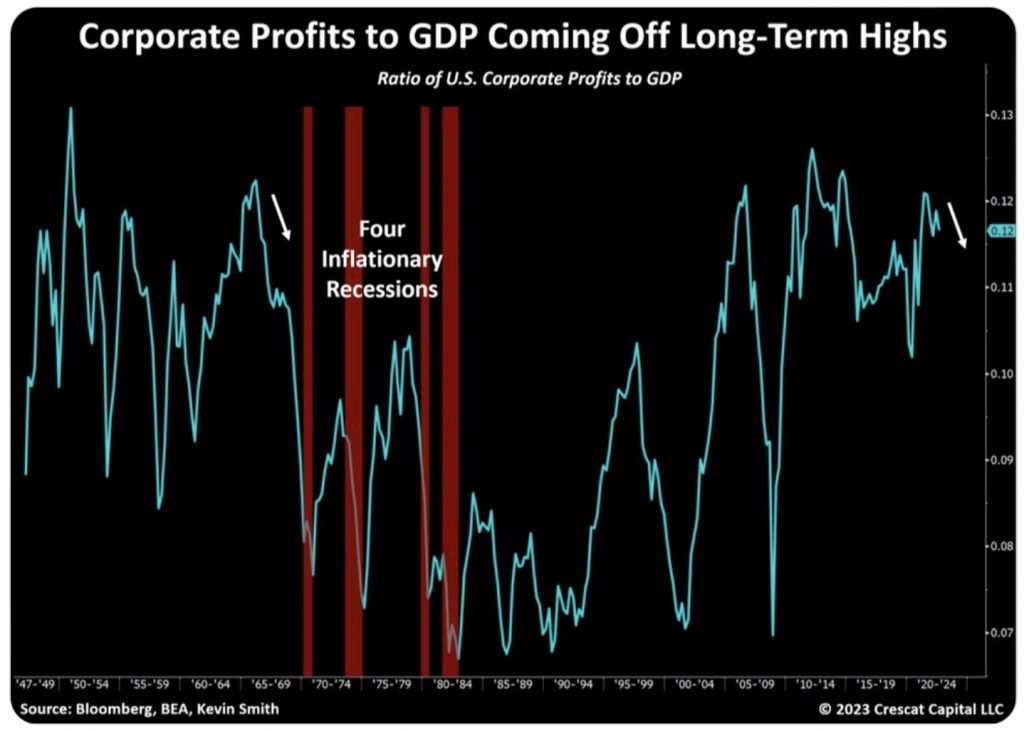 Though many investors may say they expect a recession, market positioning indicates more that most are still chasing overvalued growth stocks and fixed-income investments.

They are not positioned for declining corporate profit margins nor higher long-term interest rates and rising credit spreads.

4. Monetary Lag: This is the “built-up” inflationary pressure from over a decade of ultra-easy monetary policy that led to historic stock and bond market bubbles that are now unwinding.

Inflation is the self-reinforcing catalyst for the deflation of these bubbles. “But Kevin, the Fed is doing QT, and M2 is contracting today?”

Indeed, the 1970s showed that rising inflation rates followed money supply growth with a 28-month average lag and during a period when M2 growth was contracting. 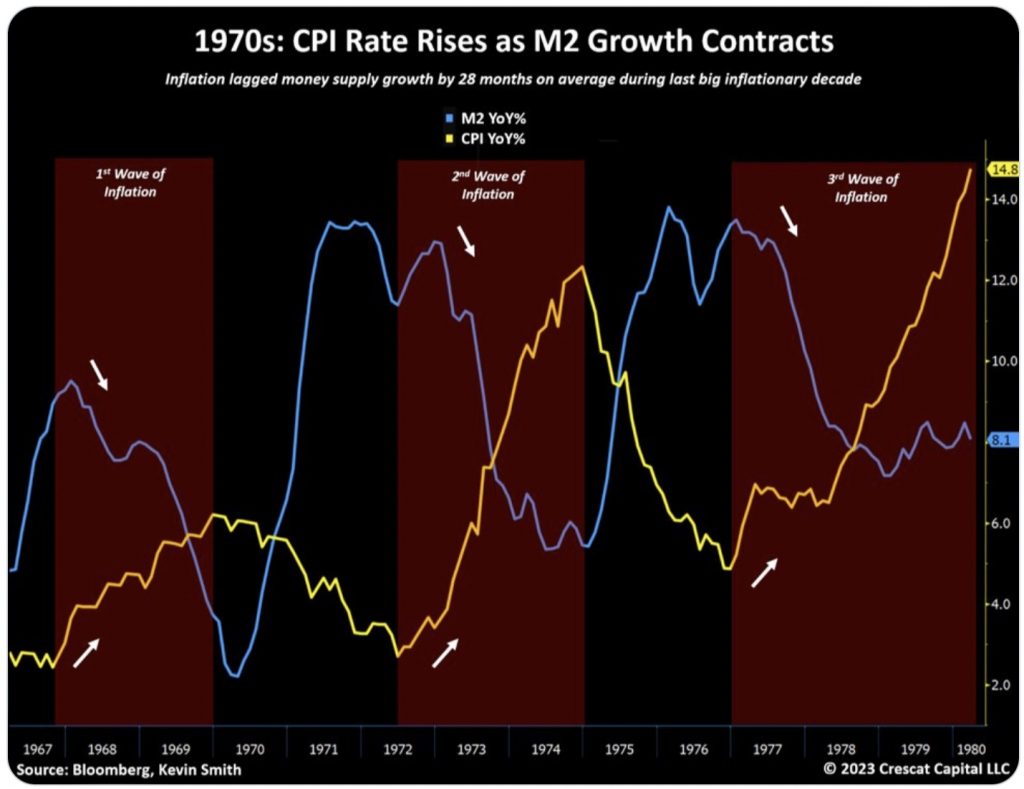 Since the 2008 Global Financial Crisis, and up until the Fed’s tightening that began last year, it has been the longest, most aggressive monetary base expansion in U.S. history, especially when punctuated with the Covid liquidity surges.

The consensus thinks that the first wave of inflation in today’s economy has peaked, and it may have, but the average inflation lag of 28 months behind the M2 surge would put the peak of the first wave not until June 2023.

Note there is a large margin for error here, but also note that the M2 swings today are even more extreme than those of the 1970s which in our view increases the risk of another surge of inflation showing up in this cycle…

ALERT:
Billionaire mining legend Pierre Lassonde has been buying large blocks of shares in this gold exploration company and believes the stock is set to soar more than 150% in the next 6 months. To find out which company CLICK HERE OR ON THE IMAGE BELOW. 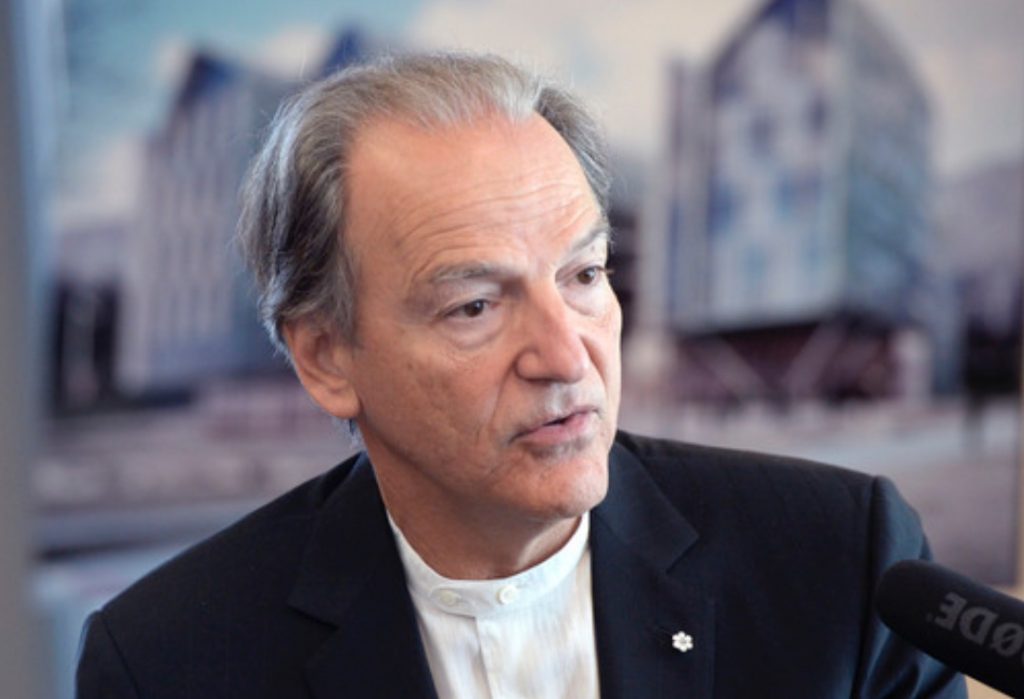 Since we started this year, the overwhelming consensus view by investors is that a recession in the first and second quarters would likely force the Fed to pivot its rate policy by August.

While we agree with the risks of a precipitous economic downturn on the horizon, the risk of inflation re-emerging during that downturn has been completely ignored.

5. Deglobalization: Geopolitical divisions between Eastern authoritarian and Western democratic countries and the Russia/Ukraine war are leading to long-term re-alignment of trade dependencies.

Commodity prices hold the key. It should not be too hard for people to see that if commodity prices started taking off again to the upside in the short run, then CPI could see another surge during this wave.

Steep moves in commodity prices can have a ripple effect throughout the economy. Many commodities have already seen double-digit increases since October. 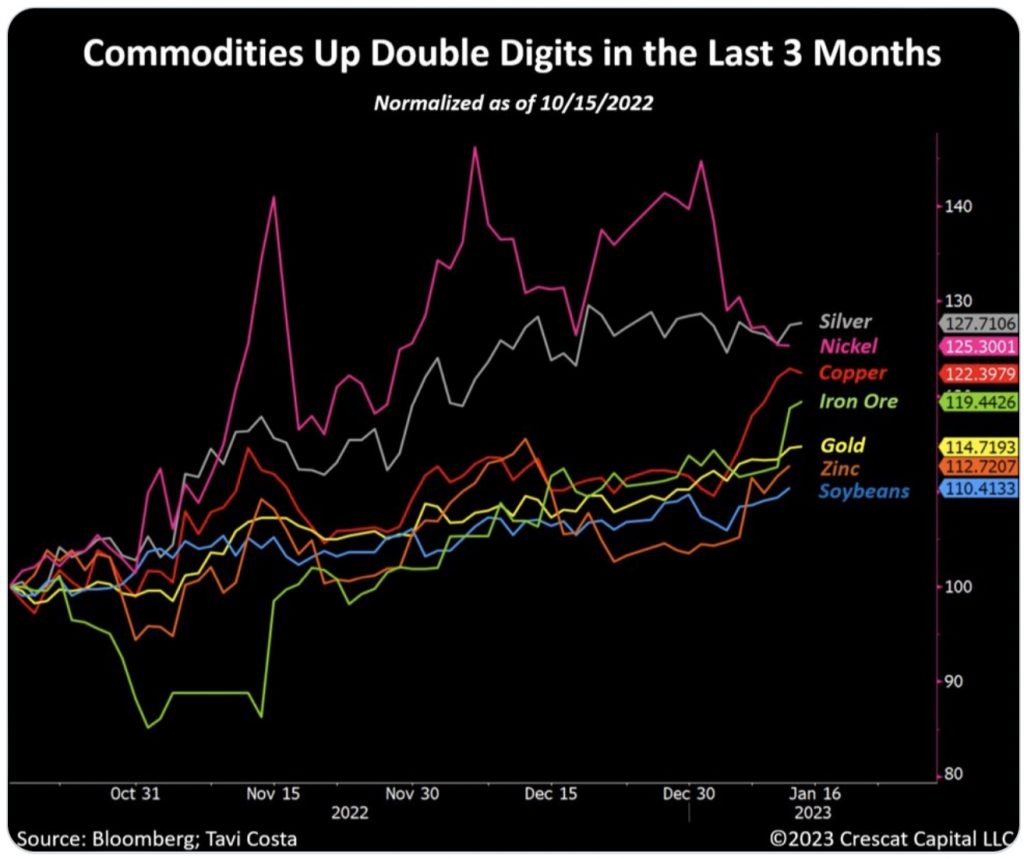 This long-term technical setup in WTI crude is one of the most compelling charts in today’s macro environment. 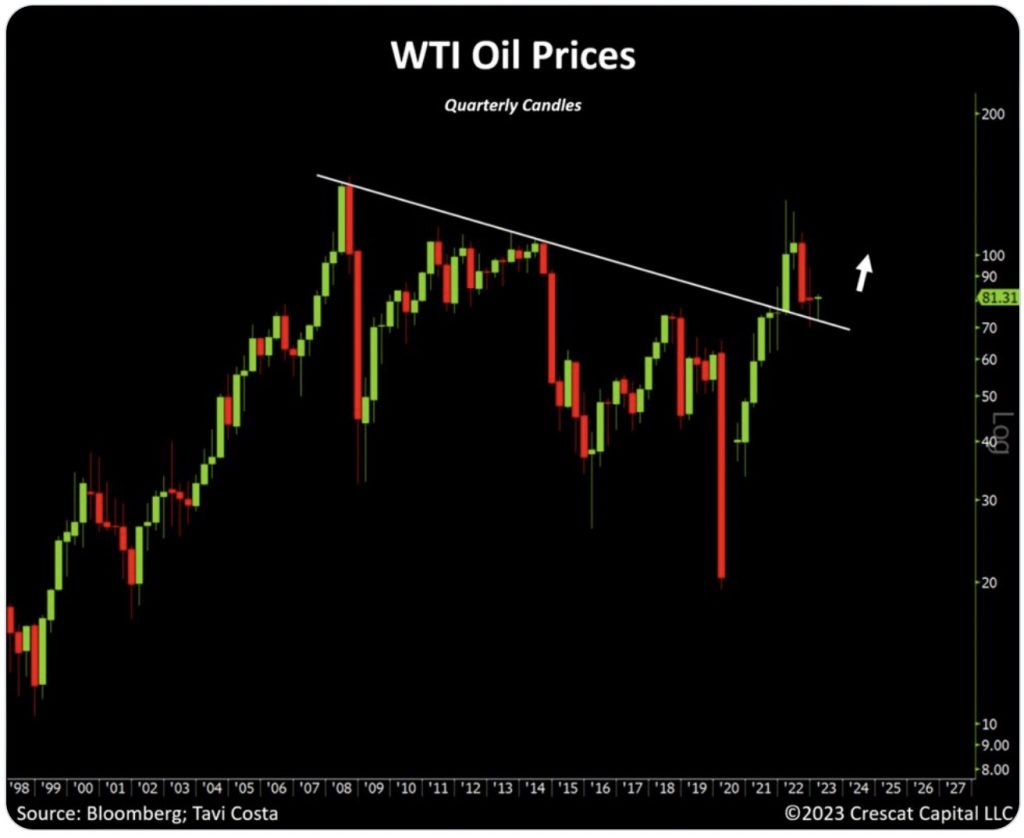 It begs the question, what if oil prices have another big move up, inflation re-accelerates, and interest rates need to stay higher for longer?

We would expect to see much more compression in financial asset valuations, that’s what…

This Company Has A Massive High-Grade Gold Project In Canada And Billionaire Eric Sprott Has A Huge Position! To Learn Which Company Click Here Or On The Image Below. 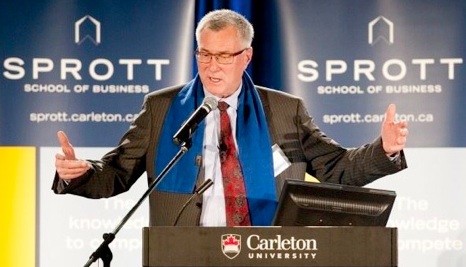 Buy gold and sell stocks. Since November, when the percentage of yield curve inversions in the Treasury curve shot up above 70%, the gold-to-S&P 500 ratio has performed incredibly well.

Just like we saw during the 1973-4 stagflationary crisis and the tech bust, we believe there is an exceptionally strong fundamental and macro case for both legs of this trade to work well in the coming months. 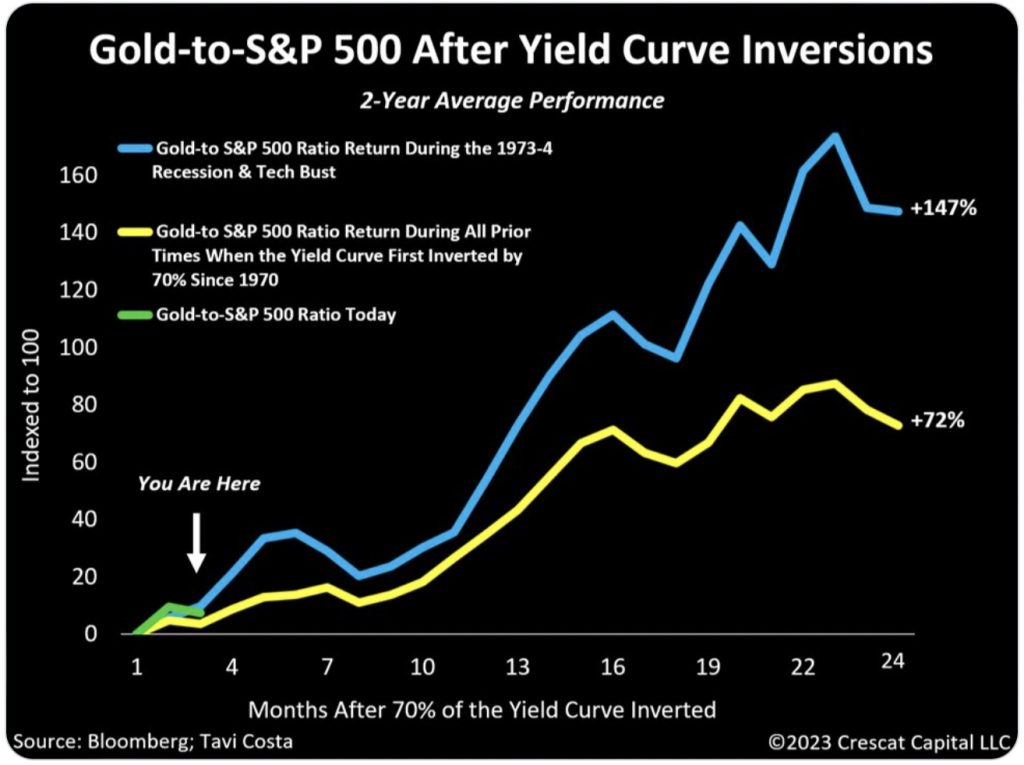 Precious metals are highly attractive. The recent cyclical downshift in inflation expectations has created an opportunistic time for investors to position for the next leg up in commodities prices, particularly precious metals.

One area that shows clearly how investors are not positioned for an inflationary recession is the lack of generalist interest in precious metals exploration.

Looking at the dollar volume traded on Canada’s TSX Venture Exchange, a market dominated by gold, silver, and base metal explorers, is perhaps the best way to see this. 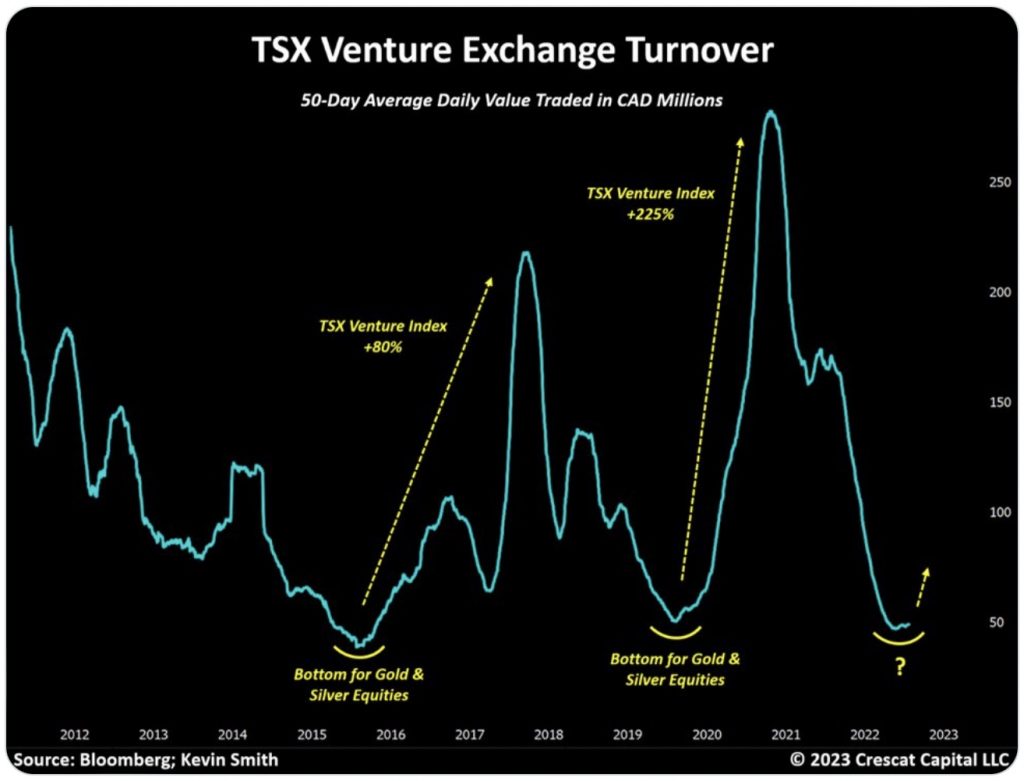 ***To listen to Michael Oliver discuss the coming central bank panic and all hell breaking loose across the globe CLICK HERE OR ON THE IMAGE BELOW.

© 2023 by King World News®. All Rights Reserved. This material may not be published, broadcast, rewritten, or redistributed.  However, linking directly to the articles is permitted and encouraged.

By accepting you will be accessing a service provided by a third-party external to https://silvergoldadvisor.com/