Stocks have soared since October but the price of gold has performed even better.

Since the October low, the S&P 500 has rallied more than 11%, but gold more than 15% This is the first time in history that gold beat the S&P more than three months following a major bottom When gold showed a positive return following a low in stocks, it tended to precede more gains for both

When stocks and gold rally together
Since pessimism peaked and stocks troughed in October, the S&P 500 has jumped double-digits. The world’s oldest safe-haven investment has done even better…

ALERT:
Billionaire and mining legend Ross Beaty, Chairman of Pan American Silver, just spoke about what he expects to see in the gold and silver markets and also shared one of his top stock picks in the mining sector CLICK HERE OR ON THE IMAGE BELOW TO HEAR BEATY’S INTERVIEW.

Referring to gold as a safe haven is arguable, but it’s still considered to be that by many. Even if we accept the proposal, it’s unusual to see an asset that is supposed to trade contrary to equities outpace them following a bottom. 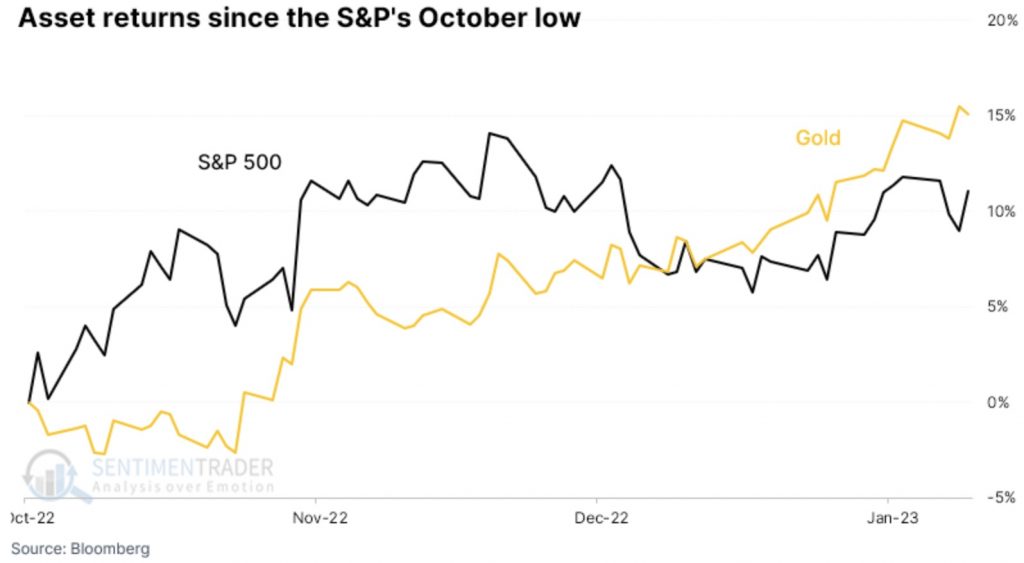 It has been 68 days since the S&P 500 bottomed last fall. Since then, it has rallied more than 11%. But gold has returned more than 15%. This is the first time since 1975 when the S&P went 68 trading days from a 52-week low, and gold’s return outpaced stocks, using price only and not including dividends. 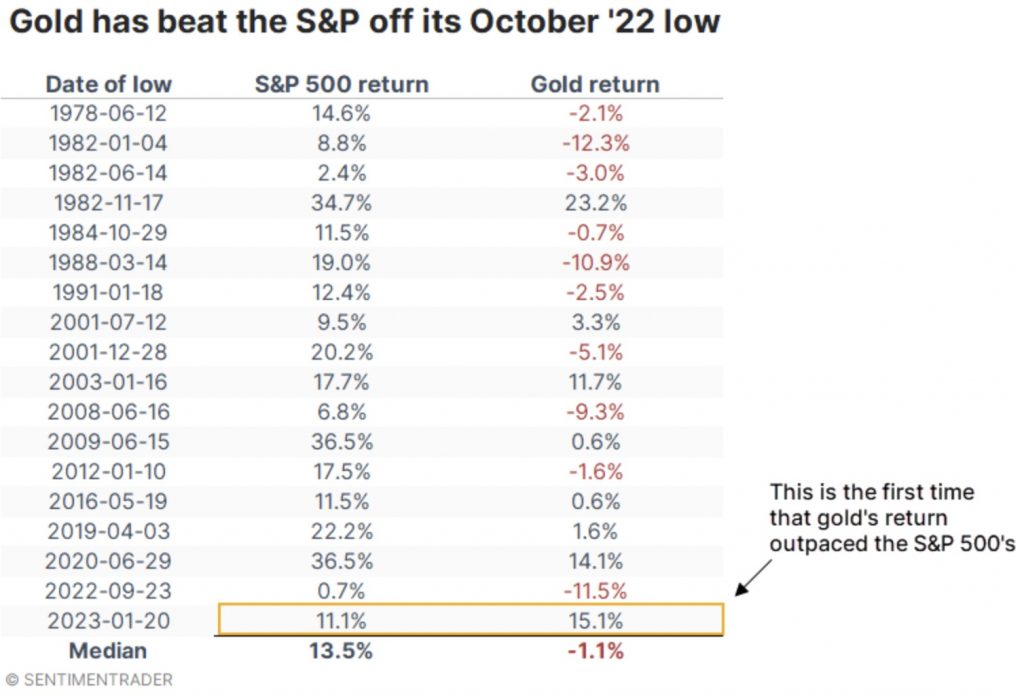 One might assume that if a safe haven asset has beaten the S&P out of a low, then it suggests that investors are skeptical of the rally. Whether that is theoretically a good thing or a bad one depends upon how contrarian one prefers to be. We don’t focus much on “theoretically” here, so let’s look at the empirical evidence…

The table below shows every bottom since 1975 when the S&P went 68 trading days since setting a 52-week low, and gold showed a positive return. There isn’t a big sample size, but out of the seven instances, the S&P managed further gains over the next six months every time but once. The failure in 2001 was persistent and nearly immediate. Most of the others saw only limited weakness. 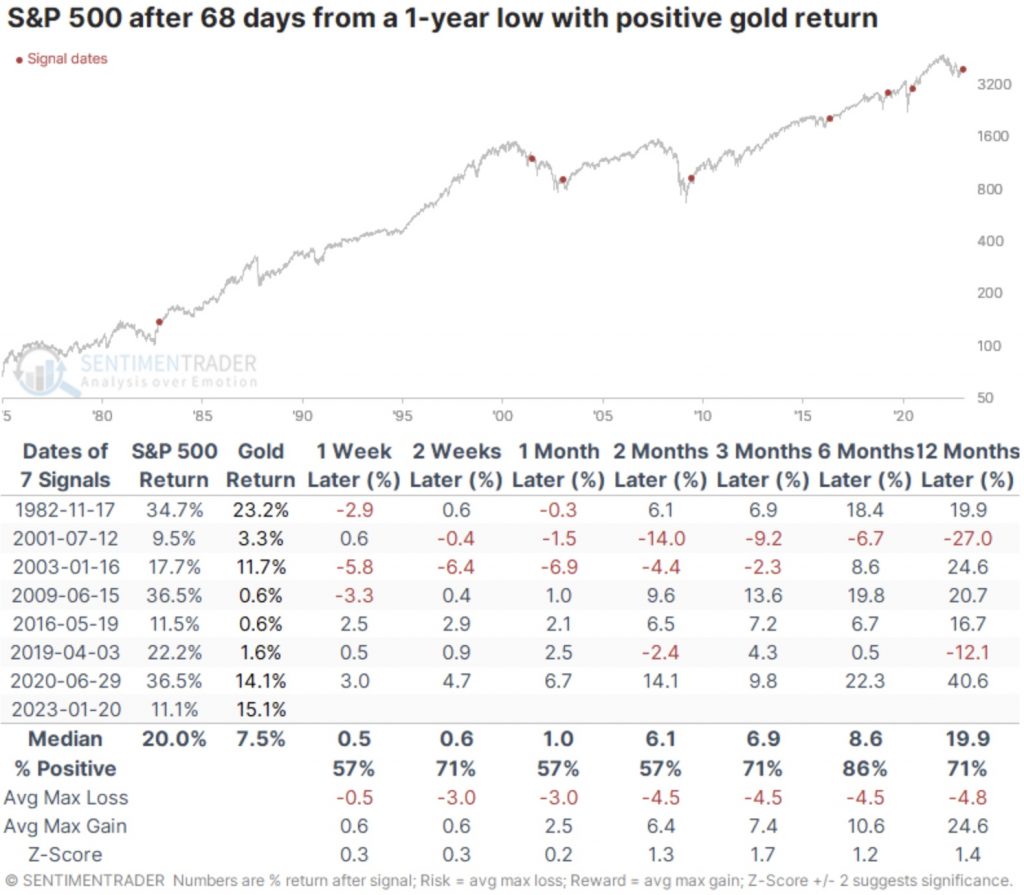 For gold, these were pretty good signals as well. It managed to add to its gains over the next 2-3 months except following the 2003 bottom, though it erased those losses in the following months. The yellow metal enjoyed quite a favorable ratio of maximum gains to maximum losses, which isn’t often the case. 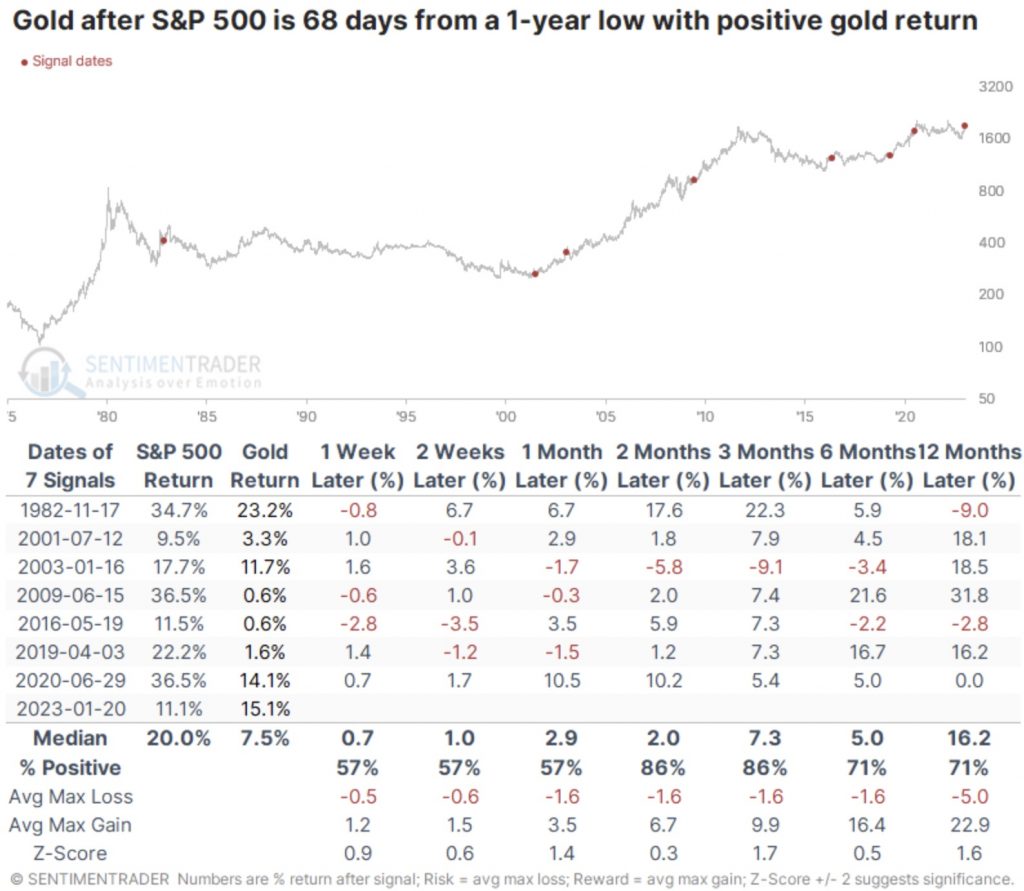 When gold doesn’t rally
Now let’s look at the alternative scenario to see if it might strengthen the argument that stocks and gold rallying together may actually be a good thing.

The table below shows times when the S&P formed a multi-month bottom, but gold did what it was supposed to do and declined as stocks rallied. For stocks, it wasn’t necessarily a negative sign, but it wasn’t really a positive one, either. Over the next six months, the S&P sported a flat median return, with risk about even with reward. Several of the signals ended up leading to double-digit losses. 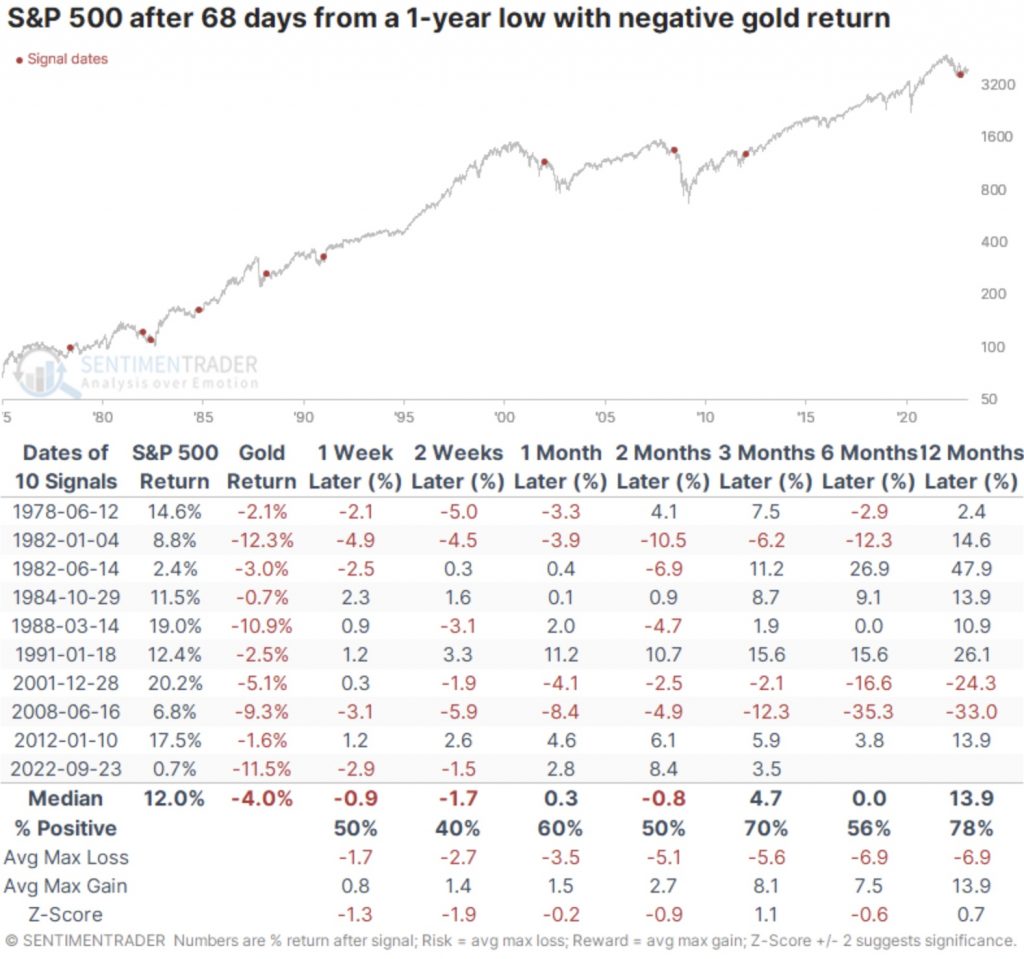 For gold, these tended to be even worse signals. After decent follow-through over the first couple of weeks, the rallies failed more often than not. Six months later, the metal sported a gain only a third of the time, with a negative average return and significant risk. Out of the ten signals, only three went on to enjoy sustained gains, though the one from September last year will likely make that four. 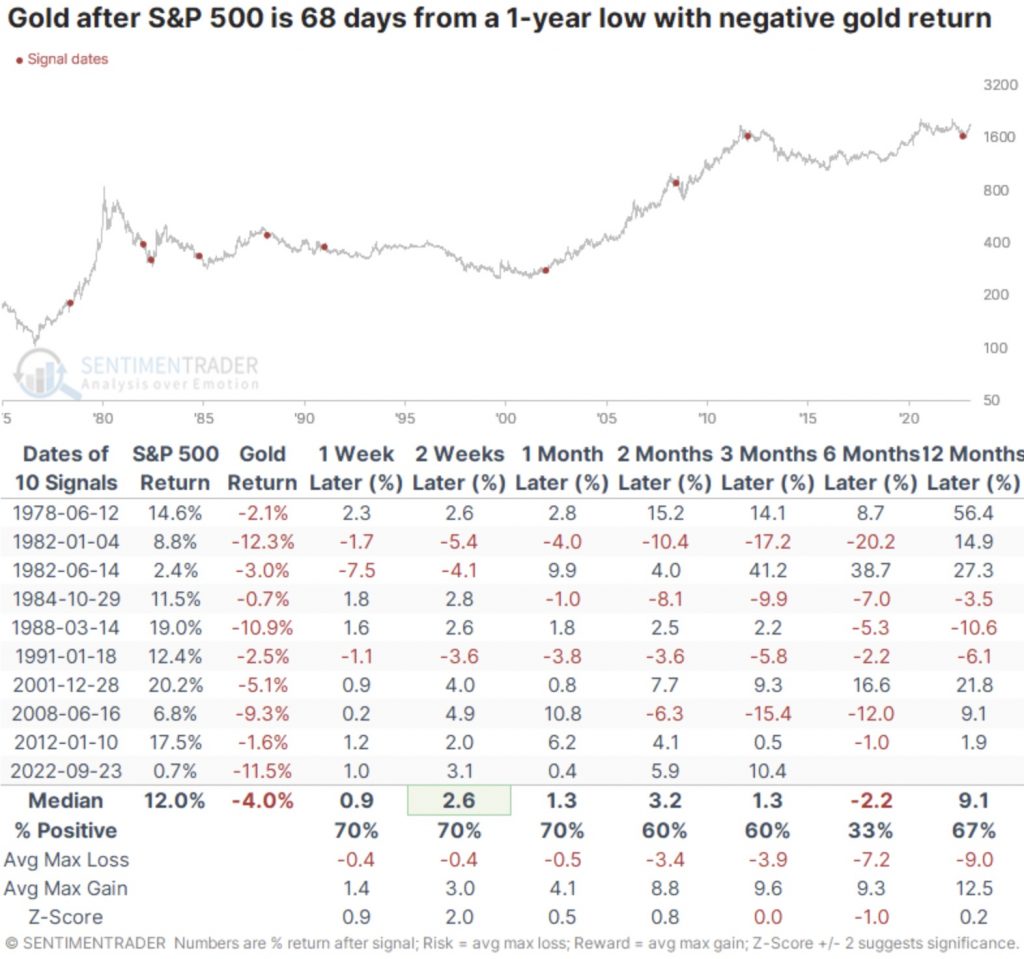 What the research tells us…
It’s always easy to get sucked into a bearish narrative. We’re hard-wired to give more weight to risks than potential rewards. Increasingly, investors are using gold’s rally since October as a sign that something is off with the rally in stocks, suggesting it’s a repeat of 2001. Perhaps it is, and there are reasons to believe it may be so. But the fact that gold’s rally has outpaced the S&P’s is a weak argument, at least based on all available (reliable) history. When gold rallied along with stocks for several months after a significant low, it didn’t weaken the likelihood that stocks would continue to rally. If anything, it strengthened it. This is another example of why Jason Goepfert is the best in the world at what he does – providing actionable market data. To subscribe to the internationally acclaimed work Goepfert produces at SentimenTrader CLICK HERE.

***To listen to Michael Oliver discuss the coming central bank panic and all hell breaking loose across the globe CLICK HERE OR ON THE IMAGE BELOW.

© 2023 by King World News®. All Rights Reserved. This material may not be published, broadcast, rewritten, or redistributed.  However, linking directly to the articles is permitted and encouraged.

By accepting you will be accessing a service provided by a third-party external to https://silvergoldadvisor.com/